What's Wrong with this Picture? 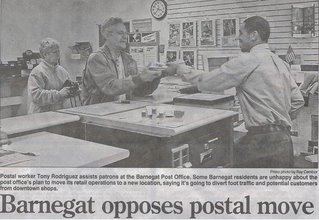 Last night at 10:30, I check my email and found a message from a friend in Atlantic City mentioning me that she saw my picture in The Press. I had absolutely no idea of why it would be there. It was too late to call and find out, so I made a flying run to WAWA, to no avail.

This morning on the way to do some shopping, I dropped of our papers at the recycle center. While WAWA didn't have The Press, the dumpster did and the picture about is what I found. So what's wrong with this picture? To be honest, nothing is particularly wrong, but I wanted to write about it, so let's get picky. :-)

I guess I would have to start with the fact that I'm probably breaking copyright laws by publishing it here, but hey, I had no idea that the picture was even being taken. No one interviewed me or asked my permission and if I was in a witness protection program, copyright violations would be the least of my worries. So Press of AC, if you want me to take it down, just let me know. I'll be happy to remove the picture, the link to your site, and be even happier to have something else to blog about.

What else can I say? Well, I remember thinking as I left that Tony was in a particularly cordial mood. Now don't get me wrong. The Barnegat staff is always cordial. It was just that this time it was to the extent that I made particular note of it.

Obviously, he knew the photographer was there, but I didn't. Now I know he wasn't hiding behind a postage stamp and I probably should have seen him. I'm glad it's been years since I was a store detective. It would be hard to live that one down.

Let's move on to the headline and the story. The gist of the story is that the downtown merchants feel that it will reduce foot traffic to their stores and hurt their business. I tend to doubt that is the case. In the 30+ years I've lived in Barnegat, I can count on one hand the number of times we went from the post office to another business downtown. In most cases the business was the reason for our visit downtown and the post office was an afterthought.

The one exception to that was one time when we were at the post office we smelled something good coming from the Hurricane House across the street. Even then we didn't make the 50 foot walk, but we did make it a point to stop there the following week to eat. However, we were disappointed in the food that time and if the post office wasn't there, we would have been better off.

The article doesn't make mention of how residents feel about the move. I can only speak for myself, but since I'm moving to NH, it doesn't really matter much. If I was staying, I would be in favor of the move. As far as I'm concerned, the current location actually makes for traffic problems. Getting in and out is a problem and the parking lot is too small for the amount of traffic it handles. I've been in 3 parking lot fender benders in my 30+ years here and two of them were at the post office.

So to summarize, there is really not much wrong with the picture unless of course, if you feel that this blog entry is what's wrong with it.
Posted by Art at 1:04 PM 2 comments:

Well it looks like spammers take at least one day a year off. On Dec. 25, I received a total of four pieces of spam. That's less than I typically get in an hour. What that means is beyond me. I would think that the vast majority of spam would be an automatic process that doesn't require human initiation.

Is this because spammers have the holiday spirit. Is it because the think any spam coming in on that day would piss off even the most gullible newbie? Who knows? Who cares? Why am I writing this? Why are you reading it?

Nuff said. Happy New Year everyone.
Posted by Art at 10:00 AM No comments:

I'm getting tired of having my meals interrupted by political straw polls or other candidate fun and games. I'm as civic minded as the next guy, but enough is enough. We have a no call list from which politicians have seen fit to make themselves immune. Since I can't stop the calls, I will take them regardless of who they are. However, I will do my utmost to answer the questions in such a manner as to not give any indication of how I will act or feel.

To Whom Do You Report the BBB?

So who watches the watch dog? On Oct. 14, I filed an online complaint against Acme Express Oil in Ocean County, NJ. They installed a new oil tank on my property and failed to bleed the lines before they left. Without getting into the details, the problem that transpired was a result of their failure to bleed the line. They refused to stand behind their work and I had to pay for a service call. It was $75. In the scheme of things, that's no big deal, but the way the situation was handled and their refusal to stand behind their work, made it a matter of principle.

I was told that I could expect notice of action within 3 weeks. A month went by and I heard nothing. On Nov. 22, I sent an inquiry about the situation, but heard nothing.

About an hour ago, I called the BBB, stated my situation and gave my information. The young lady dug up the file and looked into it. Unable to give me an answer, she said, "Let me see who handled this." and put me on hold.

After about 5 minutes of sitting on hold listening to tips about avoiding getting robbed or ripped off during holiday shopping, Nancy came on the line.

Like another verse of Alice's Restaurant, I repeated my story. Eventually, Nancy said that they had sent a reply. I informed her that I never received it and asked if they could send it again, to which she replied that she would.

I asked if she could send it right out, but she couldn't. I asked when I could expect it. She said not until at least next week, because they just got a new computer system and she was trying to figure it out. At this point I just pictured her giving a wink, wink, nod, nod to the person next to her.

It seems a bit strange that they could locate my complaint and the fact that they sent a reply (wink, wink, nod, nod), but couldn't send the response until at least next week because they have a new computer system.

Before hanging up, I asked who had handled my original complain. It was non other than Nancy.

I'll wait until next week and follow up with another call and post the results here. Anyone want to take any bets?
Posted by Art at 12:13 PM No comments: