The Father's Day Gift That Changed My Life


Let me begin by saying happy Father’s Day to my wife and children. If that seems a bit backwards to you, let me explain.

Call them coincidences, accidents, serendipity, fate, or whatever you like, but it seems as if my life has been filled with events that have taken me down paths that I could never have imagined, let alone planned.

In the winter of 1980, I was teaching in Long Beach Island. One day I went to the mailbox and saw a Technology for Children flier meant the shop teacher who had the mailbox above mine. It was offering him a two-week loan of a TRS-80 to see what computers were all about.

I asked him if he was interested in it. When he said no, I filled out the form. A few weeks later the computer was delivered. I set it up in the dining room, opened the manual and began to read. In no time at all, I had typed in my first program, which printed my name on the screen. It was nothing short of magic!

Here was a machine that would do MY bidding. It was love at first byte. I kept it home for that first week, spending every waking minute writing all the code I could. By the second week, I had it in class and was using it with my 5th graders.

When I had to send it back, I didn't want to let it go. It was like losing my best friend. I said to Jill, "I'm 35 years old, and I finally figured out what I want to be when I grow up." However, we had recently moved into a new house and with two kids and a mortgage, a computer was not in the budget, and I had no idea how I could do it.

Even though I couldn't afford a computer, I began reading anything I could get my hands on, particularly magazines and periodicals. I began saving and scheming how to get my hands on a computer. It looked like the only way that was going to happen would be if I could save enough to get a Sinclair ZX-81 kit and build it from the ground up. At that time, they were about $150. That was like $500 in today. That’s an expensive "toy."
The months past and as the school year ended and Father's Day came along. I received a gift that was not only a surprise; it was life changing. Jill and the kids chipped in order to buy me the kit!

It became my passion. I subscribed to Sync Magazine, which was devoted to the computer and had an amazing following of hobbyists and engineers who were trying to push the limits of the computer. You have to realize that this computer had no disk drive or internal storage of any kind and only 1K of RAM, but that didn't matter. It was enough to get me started, and you would be amazed at how much you could do with 1K.
Soon thereafter, they came out with a 16K memory pack. I bought it and was walking on air. Back then, 16K of RAM was more than I could have hoped for. I began writing programs for the classroom. One of my first major undertakings was a math drill program for addition, subtraction, multiplication, and division. Built into the program was a crude arcade game that sent a flying saucer across the screen and gave the user a chance to shoot it down.

In 1982, Timex bought the rights to the computer and began selling them in stores. As soon as they came out I went to the store to see what Timex was doing as far as software was concerned. They had a program called SuperMath, which like my program, was a math drill. They were selling it for $19.95. Adjusting for inflation, today that would be about $50.

It killed me to lay out that much money, but I had to see how it compared to what I did. I wanted to see how much work I would have to do to compete with what they were selling. After loading it, I was flabbergasted! My program was significantly better than the one Timex was marketing.

Later that week, I was telling my best friend, Howard, about it. At that time, he was the VP of Qualco Automotive, a company that sold a large line of aftermarket products for cars. I said I wished there was a way I could get my programs out there. He told me there was. All I would have to do is come up with the art work for the packaging. He would have his printer run it off and let me use two of his blister packaging machines at no cost and give me anything else I needed at his cost. How could I NOT take the chance?

A few days later, on a road trip with the family, we began brainstormed a name for my company. We settled on Memory Master Software. I knew that I had about three or four programs that I could sell, but if I was going to do anything, I would need more.
There were literally hundreds of programs you could buy from guys like me who advertised in Sync, Computer Shopper, and other magazines. When they arrived, they were usually in a zip-lock bag with a typed or hand written set of instructions. No one had anything suitable for sale in stores.

I took out a half-page ad in Sync magazine, which basically said that Memory Master was accepting programs suitable for mass market. Royalties would be paid based on sales. I never expected what happened next.

Over the next few weeks, I received somewhere in the neighborhood of 100 programs. Some were little more than a collection of bugs and poor code, but others were surprisingly complex, but it boggled the mind to see what people thought would appeal to the mass market.

An engineer from Czechoslovakia sent a program on bridge stress analysis. A farmer in Iowa, sent me a program that tracked hog feeding and breeding. These were not the things you would typically see in K-Mart.

I signed contracts for about a half dozen programs and set up my "factory," which was a pool table in my garage. I bought a few hundred cassette tapes and labels. I purchased ten cassette recorders from Crazy Eddie's and daisy chained them together so that I could make nine programs in each run.

My family became my assembly-line workers, and by the time the truck rolled up to my house with the boxes, I had things ready to go. All I had to do was sell them, which was not going to be an easy task.

Whenever I could I made calls and visited buyers, would hear basically the same story. Timex made them commit to three months of purchases. Then they failed to deliver during the first two months. I was visiting buyers during the second month, and they told me that they were receiving three months’ worth of merchandise the following month and there was no way they could purchase from me.

Others who were attempting the same thing I was doing, were losing their shirts. I was luck. I told them that they could afford it, because my price was so low, all they would have to do is sell a few, and they would make a profit.

They couldn’t believe it when I told them I could supply them with a line of a dozen programs at $1.50 each. Realizing that they could turn around and sell them for $19.95 each, I could make sales where others were failing. Even at $1.50 each, I was making 100% profit, because it was costing me 75 cents a program.

It became obvious that Timex had botched the marketing of the computer, and it would not be around long. Seeing the handwriting on the wall, I decided to try to make my money back and get out of the software business.

I was lucky to have a family and friends support me allow me to keep my cost low and spirits high. I made my money back with a few buck to boot, but the experience of doing it was worth a million dollars.

I now knew for sure that I wanted to be involved in computers and technology for the rest of my life. However, I was a realist. I knew I couldn't give up teaching, but I could become a technology teacher. That became my focus from that point on, and the rest is history.

On this Father's Day, I want to thank the secretary who accidentally put the TRS-80 flier in my mailbox. I want to thank Howard from making it possible for me be one of the very few Timex-Sinclair software companies that didn't go belly up, but most of all I want to thank my family for their support, for their love and for giving me the Father's Day gift that truly changed my life.

Jill told me early on in our marriage that when it came to working, I could do whatever I wanted, and that she would support me. She has stayed true to that promise every day since we were married, 16,647 days ago! There is no way I would be where I am today without you! For that I will be eternally grateful.

I love you, Jill and it seems completely appropriate for me to say. Happy Father’s Day to you. 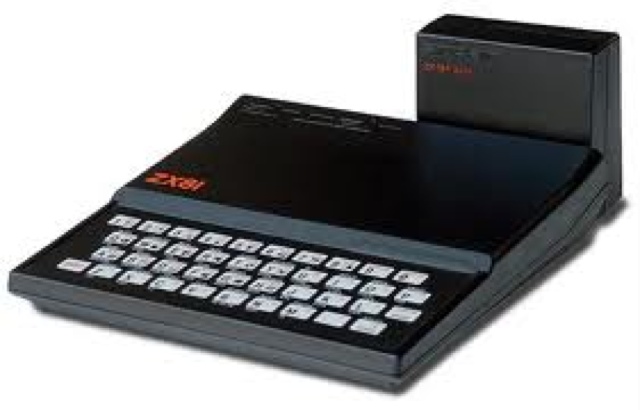