The sacrifices and hardships endured by those who choose to serve are something most of us will never understand, but all of us should honor and cherish them. In keeping with my pledge to give thoughtful posts, I'll refrain from editorializing and offer this post in the hope it will help someone in some small way.

Today, on Facebook, Mess Wright said,  "My dad was a Vietnam vet who had some issues as a result. I got to grow up dealing with that. One brother served in combat in Kosovo and is totally traumatized from that. Another brother killed himself in his driveway after serving in Iraq and Afghanistan. Trump calling dead vets losers is not surprising but it’s just one more way he beats up decent people who have served the USA in ways his accidental presidency never has and never will. I’ll never understand those of you who still support him, and I never will. I want you all out of my life for now and forever." 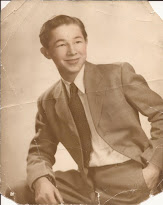 Her story, like many others, brought to mind my Uncle Harold. He was a WWII vet, but didn't speak about it much. One day, when I was about 12, I asked him what he did in the Army.  I didn't go into detail, but he told me of being stationed in Germany and of an anonymous poem pinned on the barracks bulletin board and the impact it made on him.

I sat transfixed as he recited it. It made such an impression on me, I asked him to write it down, and I memorized it that same day. Over the past 60+ years, the more I learned about the war, the more I realized, how much that poem said about his time overseas.  I have shared it with others hundreds of times and recited it in my mind thousands of times, but one time will live forever in my memory.

Back in the mid-90s, our teachers and administrators were in a battle with a board of education who ran the school district much like the country is current administration is running the country.  They had two agendas, neither of which had students in mind. In their efforts to implement them, the district suffered considerably. One was to get rid of the superintendent and the other was to cut spending as much as they could.  They started on the later as soon as they had the majority.  Sometime later, the superintendent resigned for the good of the district.

The new superintendent, while not a puppet, was powerless to fight their decisions. Lies, backroom deals, cronyism, bullying, firings, transfers, and control of local media were their tools. If a teacher or administrator opposed them, they were called to task, fired, or transferred. After a year or more of this, I decided to use the internet to get the truth out, because I felt it was a tool that could make a difference. I created Truth, Lies, Rumors, and Rumbles. 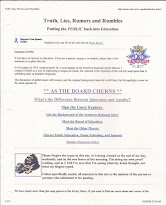 Over a 6 month period, my battle became public as newspapers began getting wind of it a teacher taking on the board on the web. The battle was no longer local as my website won a Point 5% award in the education category and the Electronic Freedom Foundation offered legal help. I thanked the EFF and told them I would let them know if I needed any.

I had a habit of fighting city hall, and as they say, this wasn't my first rodeo. More importantly, I had the advice of one of the top attorneys in the country, who just happened to be my first cousin. Before I began, I contacted him, told him I was going to take on the board, and knew they would come after my job at some point.  He told me exactly what to do and as things turned out, his advice was golden.

When they eventually did come after me, it was a surprise attack. It happened one night at a televised board meeting. The meeting was almost over.  They had just come out of a non-public session. After getting up to make a comment, they attacked me. I couldn't believe what they were doing, because it violated state law, our contract, and more, which you will soon see. As it was happening, I couldn't believe it, but then as looked at the table and realized the board attorney who was a regular fixture at EVERY meeting, wasn't there to stop them as he had in other instances when they were getting ready to cross a line. I later found out as they came out of non-public, the board president told him he could go home, because there was only 5 minutes left in the meeting.  As it turned out, those 5 minutes were arguably the most important 5 minutes in the meeting. It became the next episode of As the Board Churns.

It was at that point I decided to get the state teacher association's legal department involved. Our first and only meeting was held on the morning of the next board meeting. After I filled the attorney in on what had transpired over the past 5 months, he asked if I had any documentation. I could hear it in his tone and see it in his body language, he had heard it before.  I knew he wasn't expecting the three ring binder filled with about 250 pages of notes, letters, newspaper clipping, and more.  His eyes lit up like a kid at Christmas.

That night, as I stepped up to the podium, I saw the board attorney say something to the president. I began about a 10 minute speech that refuted everything they said during their attack on me, and then gave them a bit of their own medicine.  If looks could kill, I would have been struck dead on the spot. At one point, the VP was getting ready to say something when the attorney to put his hand his shoulder and just nodded his head, no  . It was obvious the attorney had updated them on how badly they had screwed up in the 5 minutes he was not at the previous meeting, because they never said a word.  I really don't remember what I said in the speech, or how I made the transition to the poem, but I can still see their faces every time I recite it.

I have hoped. I have planned. I have striven.
To the will I have added the deed;
All that is in me I've given
In the hope that I would succeed.

I have dared and reached only disaster,
I have battled and broken my lance;
I am struck by a pitiless master
That the weak and the timid call Chance.

I am old. I am bent. I've been cheated
Of all that youth urged me to win;
But name me not with the defeated,
For tomorrow, again I begin.

Prologue:
Shortly after that, I reached out to LM_NET, the Internet's largest mailing list of librarians, to try to find out who wrote the poem. They came through in flying colors.  The poem was titled, Unsubdued, and was written by S.E. Kiser. The version above, is how my uncle remembered it. The S.E. Kiser version had only a few words different, but the changes provide a powerful picture in to the mind of the GI who posted it on the bulletin board, but that's another discussion.

Things came to a head with the board as we approached the April elections. Three of the members' terms were expiring.  Two of them had decided not to run, but the president was up for re-election. On TLR&R, I said that on the day after the election, if the president was re-elected, I would take that as a message from the public, and would resign my teaching position. In his campaign literature, the board president said he was elected to the board by one of the largest margins in township history, and trusted that the voters would return him to the board.  When the results came in he was defeated by one of the largest margins ever.

The truth is a powerful thing!
Posted by Art at 6:34 PM No comments: