An OBD Code Reader is Half the Battle 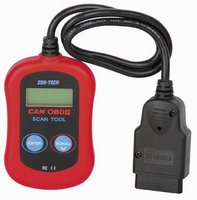 OK, the check engine light just went on in your car. What now? Well most people head to your mechanic. Of course that means money. One thing you can do to keep the cost down is to do the diagnosis yourself. To do that you need an OBD Code Reader. This little gadget plug into an interface under the dashboard and reads the computer diagnostic codes associated with your problem.

About four years ago, I priced one at about $300. Now they are down to under $40. When the light went on in my Miata last week, I picked on up. After locating the interface, I plugged it in and followed the simple directions to get the code. The numbers indicated that I had an EVAP Emission Sys Leak Detection Pump Ctrl Circ Hi.

Huh!!! It sure sounded serious, but it also sounded like something that would be covered under my warranty. Before I made an appointment, I decided to do some research to find out more about the description. So I typed in EVAP Emission Sys Leak and was taken to a page at OBD-codes.com which gave me the information I sought. It told me that the most likely culprit was a loose gas cap!

While the ODB code reader was a fantastic buy, ODB-Code.com was the icing on the cake. Putting the technical jargon into plain English was priceless.
Posted by Art at 9:01 AM 1 comment: 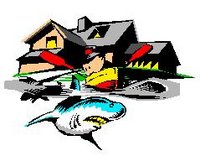 Our house has been on the market for some time, but the market for resale has been terrible. When the bottom dropped out, there was a huge building boom in our town. Builders scrambling to stay afloat were giving unbelievable deals.

Things are starting to turn around. Our listing was set to expire on 7/21. Debbie Ficke of Diane Turton Realty has been our agent, and we have been very pleased with everything she has done. After discussing it a bit, we decided that rather than simply extending, we would let the listing expire, stay with Debby, and create a new listing.

While there are advantages to allowing a lapse rather than extending, there is also a disadvantage. An expiring real estate listing had the same effect on agents as chum has on sharks.

Our day began at 9:10 with me being roused from bed by the sound of Westminster chimes. It was a real estate agent we had interviewed before wanting to know if we were still interested in selling. If we hadn't relisted it, waking me up in not the best sales tactic.

Then it started! By 11 AM, I had changed the message. It now said, "I'm sorry. No one is here to take your call. If this is a real estate agent, you are the 3,843rd caller, and I'm sorry to say we have already relisted..."

It is now 7:17 PM and the calls are still coming. Of course I exaggerated the number just a bit, but we did have about a dozen or more calls and two personal visits.

If we don't sell within the next 90 days, we will probably take the house off the market at least until April, but if we decide to go with a different agent, I know the one question that I will ask of everyone who calls. "How many people did you bring to see our house when it was on the market originally." Unless they tell me they brought us prospective buyers before, that are going to have to explain how listing with them would change that track record.

I remember, the first agent we had. We listed with her for 6 months and during that time, she didn't personally show the house once, whereas Debby has shown it a number of times. It seems like many of the people circling to get our listing, spend an inordinate amount of time doing just that. Getting a lot of listings is great for the agent, because the law of averages says that they will profit when others sell, but it's not great for all of the sellers, who are not getting action.

From Wave to Opera

Google Wave looks like it will test the limits of existing technology, but they aren't the only creative programmers around. The Opera web browser has been around for a long time, but they have a new alpha product called Opera Unite that is also unlike anything that is out there now.

Opera Unite will turn any personal computer into a server and allow you to share applications with your friends without a third party in between. It sounds cool and it is, but right now any school IT director reading about it just sprouted about a thousand new gray hairs.

I haven't played with it yet, but I'm getting ready to do that right now.

Thanks to Bernie Dodge for passing this one along.
Posted by Art at 1:49 PM No comments:

On Monday, I referred to Google Wave as Facebook meets email, meets IM, meets Flickr, meets blogging, meets Google docs, meets wikis, meets Twitter, meet Survey Monkey, meets... I'll admit that's a bit of an exaggeration, but the potential is there for that kind of future. It was the geek in me that was reacting to the developer presentation. The idea of Google making it open source and provided all of the developers with the tools they would need to create applications that would live on the wave... I began to think Wave in terms of the apps that are on iPhone. Oh, there I go again. I'm looking way too far out and at too many things.

I may be up there in the clouds in my view of Wave, but CNET did a beautiful job of bringing Wave down to the ground in terms of presenting it in its simplest iteration and reminding us that it's still experimental.

The World is Moving Too Fast for Education!

File this one under the old joke, "The faster I go the behinder I get." We are still struggling to get schools into the Web 2.0 world and now Google comes along with Wave, a new, amazing, collaborative, OPEN SOURCE product that adds a mountain of promise for the world and ocean of challenges for education.

Do you have technophobes in your district? We all know that there is little chance of getting them to change. How about showing this demo at a faculty meeting and telling the staff you want students to begin using it. The fun will start as their eyes begin to glaze over. Then the heads will go down, there will be gnashing of teeth, crying, and wailing. They won't change, but they will run from the meeting, pulling out their hair, and screaming about filing for retirement.

But wait! They will be back as soon as they realize that with filtering and blocking, it's not going to happen.
Posted by Art at 11:19 AM No comments: