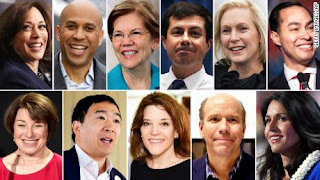 In 2013, I began volunteering with RCTV, our local cable TV channel and had the opportunity to play with the big boy toys.  In late 2018 I came up with a plan that would help me provide drama free coverage of the 2020 primary that would allow people to access the views of the candidates without having to wade through flames or having to consume large quantities of Ibuprofen.

The plan was to combine my hobby with Facebook, YouTube, and the RCTV streaming server to create a set of tools and resources that could be used by people in a variety of ways without the stress or turmoil that always accompanies any kind of political forum.

Here is a guide to my tools along with links to access them.

1) The Wired Geezer Facebook page -  https://facebook.com/wiredgeezer
I'm recording as many of the candidates from as many parties as I can, as they appear in NH. The videos are hosted on the RCTV streaming server and posted on the WiredGeezer Facebook page. The unique aspect of the server is that it allows me to index the video so that I break each hour into 2-4 minute segments based on topics being presented or questions being answered. The stress free aspect is ensured by having commenting turned of on the page.

2) Raymond Community Television - http://raymondtv.viebit.com (Videos are in the Primary 2020 folder)
If you want to bypass the WiredGeezer and avoid any kind of commentary. visit this folder to access the indexed videos of all the presentations I have shot or will be shooting. So far I have Andrew Yang, John Delaney, Elizabeth Warren, Julian Castro, and Pete Buttigieg.

3) The Wired Geezer YouTube channel - https://www.youtube.com/channel/UCb3nfamt3loK1ufA1Mv78ig
The videos here are devoted to my candidate of choice, Andrew Yang.  http://yang2020.com When I mention that name, I get a variety of responses. In no particular order they are:
a) Who???
b) You mean that liberal wingnut that wants to give everyone $1000 a month.
c) Yeah, I know him, but he hasn't a snowball's chance in hell of winning.

If you are thinking any of those, you are not alone.  I thought the same thing for at least 30 minutes after I heard his name, but as I read, my opinions changed. I found out who he was. I found out he wasn't a nut case. He is actually an Independent, but anyone knows a total unknown Independent truly wouldn't have a chance. He a visionary who actually has plans and policies thought out and carefully detailed in his book and on his website.

While only time will tell if he can win, I see his recognition and following growing ACROSS party lines, including a lot of die-hard Trump votes who say he is the only Democrat they would vote for over Trump. Finally, and how many of us thought Trump would win in 2016?.

I could go on in great detail about him, but I'm not going to do that. I would rather you visited the YouTube channel and learn for yourself. I will give you one teaser to help peak your interest. IMHO, until recently he has been intentionally ignored by much of the mainstream media, because he poses a new and different kind of threat to the 1%ers and the status quo. What has changed is that he has been he is polling higher than at least two of the other Democrats in the image above, and that was before he appeared on the Joe Rogan podcast, where his was seen by more than a million YouTube visitors, many of whom were Trump voters and have since appeared to support him on his base camp Facebook page.