Implosion of the Sands Hotel and Casino 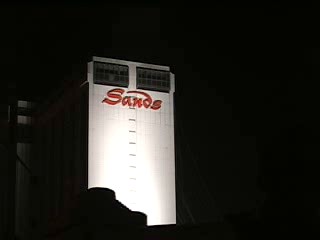 The implosion was set for 9:30 PM. Jill and I debated on when we should leave to get at good seat. When it comes to that kind of decision making we usually miss the target. Since the weather was nice, we decided to get there early. So armed with my video iPod and a few hours of TV shows, we headed down the Parkway at a little after 6:00. If we arrived much later, we would have missed our mark.

I wanted to park at Bally's, the closest casino parking lot. As is stood, the first open spot was on the roof. By the time we made our way down to the boardwalk with our folding chairs, it was around 7:00 and the crowd had just begun to form. We could have gotten about a 3rd row spot at the very best viewing area, but opted to take a front row seat in the second best spot. As time passed, the crowd grew and the boardwalk was packed as far as the eye could see, even standing on my chair.

At 9:30, there was an 8 minute fireworks display which culminated with the implosion. As you watch this 2 minute video, you'll hear a loud bang, see the camera shutter and shake as Jill grabbed me in a reflex reaction, along with some verbal commentary. When you hear me say, "Grab the chair." you'll hear a chain reaction of smaller blasts and 9.6 seconds after the first blast, gravity begins to do it's thing .

The Press of Atlantic City describes the entire implosion scenario and provides a series of artist renderings that shows how the implosion should go (1) (2) (3). It went off like clock work!

Of course it took about 15 minutes to make it the half block from our seat to the car and another 40 minutes to make it out of the garage which was bumper to bumper for seven floor, but all in all, it was well worth it.
Posted by Art at 9:55 AM