Don't Get Gouged by Scratch Aide 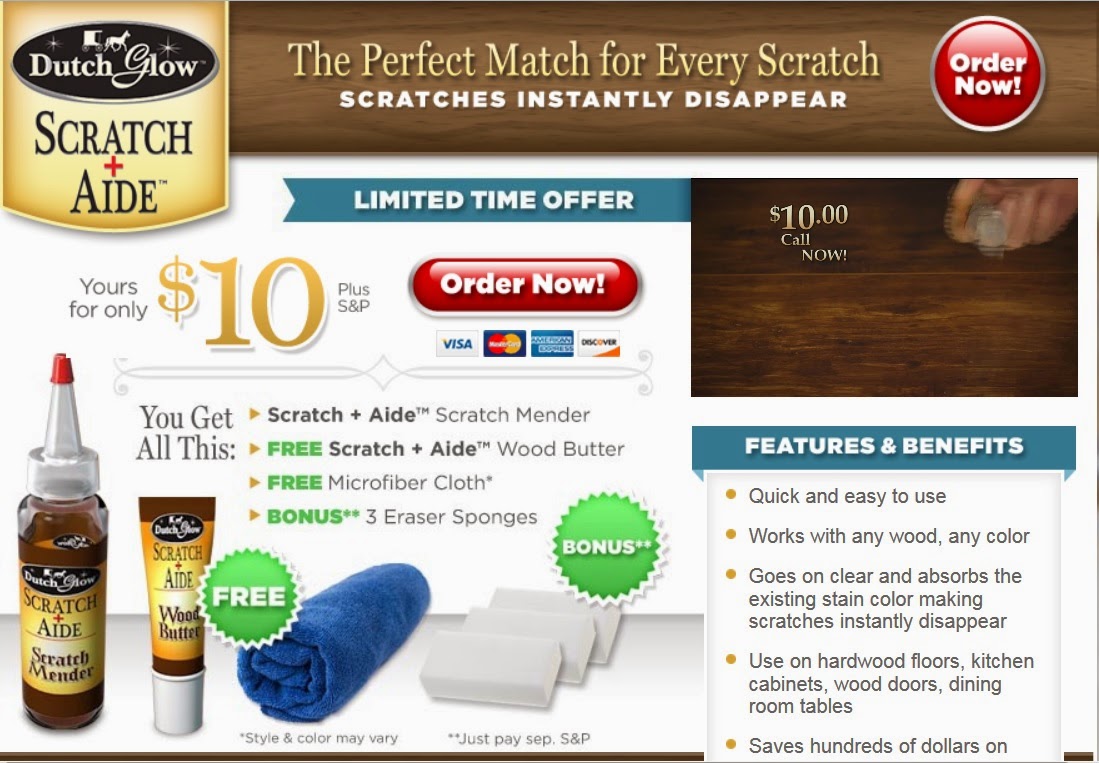 My wife saw Scratch Aid advertised on TV and asked me to order it.  I knew what to expect.  I would order the over priced product and get charged shipping that would insult to injury.  As soon as I went online and saw the asterisks, and knew things would get worse before they got better.  You'll notice that you get the Scratch Aid, FREE wood fill, and a BONUS** of 3 eraser sponges. I saw that in order to get the FREE BONUS, all I had to do was pay separate shipping and postage. YEAH RIGHT!

Had it been me alone, I would have stopped right there, but my wife wanted it, so I decided to go online to see if I could just get the Scratch Aid and let them keep their BONUS.

Of course I went through the entire process, which included having OPT OUT of about a dozen different orders.  I bet MANY of unsuspecting people order one or more those additional items without realizing it.

As I suspected, I had to enter all of my information, including credit card, before getting to the point where I found there was no way to refuse the BONUS.  When I got to the point of the process before the final screen and confrimation, my $10 Scratch Aid was now up to about $29.

The thing that REALLY frosted me was that the BONUS was really a PENALTY, because you can buy the same items in any grocery store for less than 1/3 the price!  $7.95 shipping for three sponges, when you can get a four pack of Mr. Clean Magic Erasers for $3.14, is hardly what I would call a bonus.  BOGUS maybe, but not a bonus.

At this point, I said, "HELL NO!" and closed the browser WITHOUT finishing the order.   Incidentally, I've been purchasing things online since about 1980, long before the Internet, and I know the ordering process.  I did NOT complete it.  If that had been the end of it, you would not be reading this.


WHAT HAPPENED NEXT IS WHAT PUSHED MY OUTRAGE BUTTON

The following day, I received a call from Scratch Aid wanting to ask me about my order to see if I was satisfied.  WAIT!  I just went to the website YESTERDAY and DID NOT ORDER ANYTHING.  How could I be satisfied and WHY WERE THEY CALLING?  I DIDN'T COMPLETED THE ORDER!

Remember, I had to give all of my information. Obviously, they were using that to try to get the sale one way or another.  Red flags were waving wildly in my mind. At best what they were doing was shady and a violation of  consumer rights.

I stopped her in mid-sentence, which wasn't easy, and told her in no uncertain terms that I did not order anything and my credit card should not be charged.  She informed me that had to be handled by billing, who I could reach them on Monday during regular business hours, and gave me the number to call.

I called a little while ago and after a long hold, I got through.(No surprise there!)  After confirming all of my personal information, the agent said I see you ordered...  Again I stopped her in mid-sentence by saying, "NO! I did not order anything!  I never completed that order and my card should not be charged!"

At that point she politely told me that she would cancel the order, which she did.  However, that is a problem in itself, because I DID NOT COMPLETE THE ORDER.  If they had processed it, I believe that would be ILLEGAL.

I bet hundreds, if not thousands of people, end up paying exorbitant costs in over priced products and inflated shipping charges.  In the end, it is CAVAET EMPTOR! DON'T GET GOUGED BY SCRATCH AID!