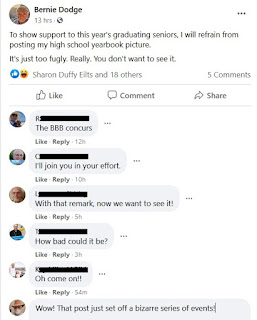 The fact that I'm writing this is testament to the cabin fever of Covid 19 social distancing. The fact that you are reading it confirms your situation as well.

I just came here from Facebook, where I was going to reply to the post from Bernie Dodge on the left. It set off a bizarre chain of events that just couldn't be typed as a Reply, mainly because I'm incapable of writing a long post inside FB without accidentally posting it 15 times before I finish typing.

I'm giving the Reader's Digest version, because the chain of events continues beyond the topic of this post. The full version is something for a much longer post or series of posts that will put most people to sleep, but may be of interest to a few.

By now you have read Bernie's post. When I read it, something clicked and my mind went back to an unsolved mystery from the late 90's. It took place on the K-12 Admin mailing list. A debate was taking place about the nature of schools and change between the Sages on the Stage and the Guides on the Side crowds. Then along came Ditherhead.

Ditherhead was definitely aligned with the Guides on the Side. He was an in your face kinda member who came out of nowhere. His opinions were not take well by the Sages, but what bothered them most was the fact he didn't identify himself in any way.  They demanded to know who he was, but he never said.

The debate became more heated, not about school change, but about Ditherhead's anonymity and his lack of respect for their opinions and PhD's in their signature lines. Ditherhead was relentless in putting forth his vision of schools, and the Sages were relentless in their attacks on him.

Then things took a turn for the better or worse, depending on your perspective. Ditherhead began toying with them about his identity.  One day, in response to the demands that Ditherhead reveal himself he said that he wouldn't say who he was, but would post a picture of himself. 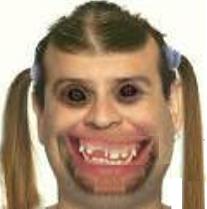 IS THIS BERNIE DODGE'S SENIOR PICTURE?

Note: There is much more to the chain of events that unraveled as a result of Bernie's post. I've heard nothing from Ditherhead in more than 20 years, but I have run into this photo in context of my work, including an interesting discussion with an FBI agent and his familiarity with it, my first meeting with Tom March, the discovery of a long lost video, and a 9 year search for a decent haircut in NH, but those are all stories for another day.