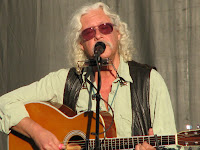 One of the best kept musical secrets in Massachusetts is hiding in Framingham. It's the Amazing Things Arts Center. Mike Moran and his staff of volunteers manage to attract some great talent. Thanks to their efforts and contributions from local businesses, they bring high class talent at bargain prices.

On September 10, they organized a concert for the opening of the Bowditch Field Athletic and Cultural Complex, with Arlo Guthrie as the headliner.

I've seen Arlo about four or five times over the years. I feel a deep connection to him and his music for a number of reasons including being a fan of Woodie Guthrie, having my own Alice's Restaurant story, and having survived the 60's. His music is as fresh today as it was back then and every time I hear him, his stories are new.

This was the first stop on his new "Journey On" tour. There was a great mix of old standards, some tributes to great musicians like Lead Belly, and a new song that gave the tour its name.

One of the most amazing things was that the tickets were only $10, which is a tribute to the fund raising efforts of Mike Moran and his staff. We got there at 12:00 thinking that Arlo was going to be on at 2:00, but I didn't do my research very well. When we arrived there were about a half dozen other people parked on the grass in front of the stage.

One look at the program and we knew we were in for a long wait, but the time went by quickly as we enjoyed the relaxed atmosphere, some good food, and local talent including the Amazing Hooligans, Marian High School 'Mainstagers', Framingham High School Musical Review, Rust Never Sleeps - a Neil Young Tribute Band, Eguie Castrillo and his 18 piece Latin band, and HELP! with Mark Poulan and Roy Orbison.

I took a lot of stills and captured a few sounds on the video below. No artists were harmed in the making of this video, because all sounds are presented under Fair Use Guidelines, without violating any copyrights.

You may have missed this great concert, but keep visit the the Amazing Things Arts Center and check out the lineup for the rest of the year!

It all started when I wrote about my problem with an estimate from Home Depot, which prompted me to call on Lowe's for an estimate.

Today, the Lowe's installer, Ken Bishop of Bishop Contracting in Bedford, and his helper Brian installed the door. They arrived at 10:00 AM, worked right through lunch and finished at 2:00.

The Home Depot installer was going to charge $100 to get the door into the house. Ken took the doors off the frame, brought them in and then Brian handed the frame up to him from the outside of deck. A piece of cake!

Home Depot said they couldn't reuse the molding, they would have to replace it and we would have to paint it. Ken was going to reuse our molding. I assumed that I would have repaint it. I was hoping against hope that it would be able to get away with just be touch up nail holes and fills. They did such meticulous work that you would never know the door wasn't there from the day we moved in. It need NO paint at all.

Jill and I couldn't be happier with the door and the work.

For our Sherwood Glen members, you can find Ken's full contact information on the vendor list in the Members section. For those of you who are not members, you can reach Ken at kbishopcontracting@comcast.net .
Posted by Art at 3:32 PM No comments: