After Dad's Death - The Rest of the story!

Last week I posted about strange happenings after my father's death.  I suspect some of my friends thought that I was a little bit crazy.  However, since then other even stranger things have happened and this post does two things.  It puts all of the events in a sequence and removes all doubts about my sanity.  Clearly, I am crazy. ;-)

When it comes to the events I am about to describe, religious people would make a heavenly connection. Atheists and skeptics would dismiss them as pure coincidence, whatever that means.  As for me, I am not religious or an atheist. I am, however,  spiritual. I believe we are all made of star dust and share cosmic connections, some of which are stronger than others.

It’s not my intent to try to attribute the events of the past week to any of the above reasons.  I’ll simply relate the events as they took place and let you come to your own conclusions.  Whatever you believe, I think  many of you will agree that at least some of the events are more than coincidence.

My father died on Wednesday, June 19 and things started happening.

1)      On Wed., when my sister got home from the funeral home, after going over the funeral details, there was a bright, brand new, 2013 penny sitting on the center cushion of the den couch. Apparently this has been experienced by others and is easily dismissed.  I thought nothing of it when she told me.

2)     On Thursday, when my mother woke up and came to breakfast, she said that she kept hearing alarms going off during the early morning hours. We didn't think it was particularly strange until we got a phone call from my niece who lives on the other side of town and told us that her phone alarm, which was not set and not being used, went off every half hour beginning at 4:30. It really freaked her out, and coupled with mom's story, Twilight Zone music began running through my head.

3)      Then throughout the day, lights in the house kept dimming and flickering unexplainably. My sister said that the only time this ever happened was doing a storm. At first, I dismissed it, but as the day went on, and even the next few days, it still is happening. Again, this is easily dismissed.

4)      That night, actually next morning at 1:43 AM, my sister's phone alarm went off. It wasn't set and it was a ring tone she never used. She didn't see any significance to the time, but I immediately remembered that during my high school years, Dad had a trucking business and used to set his alarm for 1:45AM.

5)       She was telling me this while I was checking email on my phone. I told her it couldn't happen to me, because I turn the phone to silent at night. At that instant, I noticed an email setting was changed. I'm positive it was not something I had done accidentally, because I had made no settings change on the phone in days and had looked unsuccessfully one or two times for this particular seeing in the past.

6)      On Sunday a service was scheduled at the house for 7:30. When my cousin arrived early in the day the first thing she related was about her mother, my father’s sister.  She and Dad were the closest of the five brothers and sisters. She has Alzheimer’s and hasn’t recognized family for quite a while. Her children had made the decision not to tell her about his death. They felt that even if she did comprehend, it would serve no useful purpose.  When my cousin visited  my aunt after the funeral, the Director of the facility said, “You are not going to believe what happened.” She went on to relate that at about 11:30 (the same time the funeral was coming to an end), my aunt started pounding the table  and screaming (something she has never done), “Someone is dead!  Someone is dead! You have to listen to me! He’s dead! Someone is dead!”  What the funeral director didn’t know was that my aunt often referred to dad by his Yiddish name, Shimon. The fact that she said “he’s dead”, we feel she was actually saying, “Shimon is dead!  Shimon is dead! You have to listen to me. He’s dead! Shimon is dead! 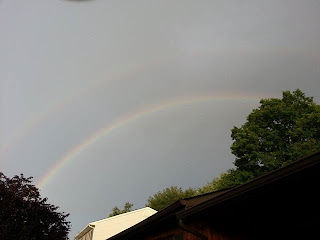 7)      Weather had been perfect the entire day, but five minutes before the service was to start, a passing thunder shower hit and my niece, who was outside, called everyone out of the house to see a double rainbow that had formed.

8)      Five minutes after the service was over, we got a call from Dad’s best friend’s daughter, who said that she had told her father (who was on hospice) about my father’s death and that he passed away earlier the day of the service.  The double rainbow?

9) Mom insisted on returning to her assisted living apartment on Monday. Right after we got to the room, alarms went off in the hall for about 10 seconds. Right after it happened, my sister checked with administration and maintenance, but they said there were no alarms. All four of us in the room heard them as clearly, but apparently no one else did.

10)  We went back to the room and less than 20 seconds later there was knock on the door. Jill was right next to the door and opened it immediately, only to see an empty hallway. We all heard the alarms and the knock!

11)  My wife loves Carmel and we saw that McDonalds was advertising Carmel shakes for a limited time.  We didn’t have them in NH and she said she wanted one before we headed home on Tues.  On the way back to my sister’s house we pulled into the drive-thru of McDonalds only to find out that the milkshake machine was broken. We all laughed and joked about dad pulling another fast one.  No one actually though that, but with everything that was going on, it was just a way of lightening things up, but then Tuesday brought events that made us question our joking. 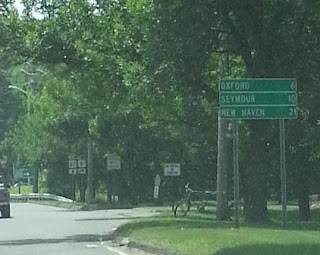 12)  Whenever we go to and from NJ, we stop at the Blue Colony Diner of Rt. 84 at exit 10.  Usually we stop in both directions. Sometimes we eat there and other times we just pick up baked goods for folks in NJ or NH.  This time was no different.  We picked some baked good and got back on the road.  Jill said that she wanted that Carmel Shake and asked me to stop at the first McDonalds to see if they had them  We got off at Exit 15 and almost flipped out as we came up to the light and saw a sign for Seymour. CT!  Had the shake machine not been broken in NJ we would never as stopped at that McDonalds in CT and never seen that sign. 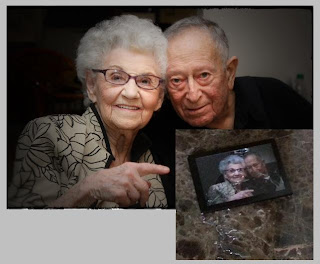 13) When we arrived home the first thing we noticed that a picture fell off the fireplace mantle. A number of times the cat has knocked off my picture which sits right where she likes to sleep. There are three other pictures that have never been disturbed before.  This is a scan of the picture with what we saw superimposed.

So there you have it. Any one of these happenings… WHOA! Just as I typed that last sentence, my computer made three low pitched beeps that I have never heard before.  I’m talking about a computer I have had for five years and use about 4-6 hours a day. I’ve been around computers since 1979, I’ve built computers and I should be able to identify the source, but I don’t remember any programs that I use that make that sound. Only Firefox and Word are running. I checked the Task Manager and there are no programs or processes running that could have made that sound.

As I was saying before the beep, any of these happenings can easily be dismissed, and had there only been one or two, I might have done so, but for me, the sum is greater than the parts. You can make up your own mind.
Posted by Art at 4:13 PM 5 comments:

Funerals and Things That Go Bump in the Night

We've all heard about strange things happening after the death of a loved one. I'm not a disbeleiver, and as my son  says, there are many levels to the matrix. Having experienced strange things under different circumstances, I keep an open mind, but today I'm a believer.

My father died on Wednesday and things started happening that were unexplainable. On Thursday, when my mother woke up and came to breakfast, she said that she kept hearing alarms all during the night. We didn't get upset and didn't think it was particularly strange until we got a phone call from my niece. She told us that her phone alarm, which was not set and not being used, went off every half hour beginning around midnight. It really freaked her out, and coupled with mom's story, Twilight Zone music began running through my head.

If that had been the only thing, I  would have still been a bit skeptical, but since then other things have been happening. For example, when hen we got home from the funeral there was a bright, brand new, 2013 penny sitting on the center cushion of the den couch.

Then throughout the day,  lights in the house kept dimming and flickering unexplainably. My sister said that the only time this ever happened was doing a storm. At first, I dismissed it, but as the day went on, and even today as we're sitting here, it still is happening.

Last night at 1:43 AM, my sister's phone alarm went off. It wasn't set and it was a ring tone she never used. She didn't see any significance to the time, but I immediately remembered that during my high school years, Dad had a trucking business and used to set his alarm for 1:45AM.

I said that it couldn't happen to me, because I turn the phone to silent. Then it hit me that when checked my email, I noticed that a setting was changed. I'm positive it was not something I had done accidentally.

I'm not sure exactly what to make of this, but I do know that is not ordinary. It might be Dad trying to communicate with us, anomalies created by the minds of the loved ones, or something else, but whatever it is, I do you know is not ordinary!

Have any you had similar experiences?

It has become increasingly obvious that some people who post or read items on FaceBook have a problem telling the difference between satire and actual news. (In come cases, that is entirely understandable.) So as a public service, I am providing my list of PARODY SITES.

In case you wonder why, there are two reasons.

1) I have seen each of these sites either posted as actual articles or interpreted as such by readers of posts.

2) As the NewsBuiscuit reports, '17% of Children are Just F***ing Stupid', and we all know what stupid children become when they grow up. Yes, that's right... politicians.