This is an update of my Feb. 24 post on Norton Mobile Security's failure to pick up on malware on my phone, poor first level tech support, and not receiving a follow up call as promised.

In that blog joked that if tech support might be on Venus whose day is 243 time an earth day.  In that case, based on a call promised after 2 hours,  I could expect a call sometime around March 15.  Apparently I was  wrong.  They may be on Pluto which has a day only six times the length of an earth day... or maybe there is another explanation.

The interesting thing is the the fact that the call back was not from the next level tech support.  It was from a Norton case manage who said he "noticed" that my problem was not solved and wanted to know if he could help me.

Are you kidding me???  I have no idea how many calls Norton first level support gets in one day, but I know it's a LOT!  I've been around computers since 1979 and I feel comfortable saying that the chances of a case manager coming across my case, seeing that it wasn't resolved, and calling me personally, are probably worse than the odds of me being struck by lightning on a sunny day.

Could it be that this blog actually made its way to someone at Norton? Could it be the screen shot of a popup ad sitting on top of the Norton Mobile Security dashboard was not the kind of image Norton wants to project? Could it be someone directed the case manager to follow up?  If so, calling and insulting my intelligence is really not the best way to help either of us.

At the bottom of every email I sent, is my contact information along with this signature line.  "I am perfectly capable of learning from my own mistakes.  I will certainly learn a great deal today!"  We learn by acknowledging our mistakes and extracting lessons from them.  Making excuses doesn't cut it.

Perhaps if you asked for suggestions on how Norton could improve their product or support, I could have offered some.  As it turned out, when I solved the problem myself, the source of my infection became evident.  It was a mistake I made and I learned from it. At the very least having that information would have been useful to you and I could have shared it.

I'm usually a glass half full  type of guy, but in this case the first level tech support was a fail, the product was a fail, and the very late follow up read more like damage control than concern for a customer.

If you want to call again, please do so and let's talk about what I learned when I solved my own problem.  Let's talk about how Norton can also learn from it, and prevent others from experiencing the same problem, because I can bet you that MANY OTHERS are experiencing it.

If we chat, maybe the next blog will be one about a company that listens and learns. Maybe there will be a few less calls to first level tech support and a few less failures to follow up with second level support.
Posted by Art at 11:23 AM 5 comments: 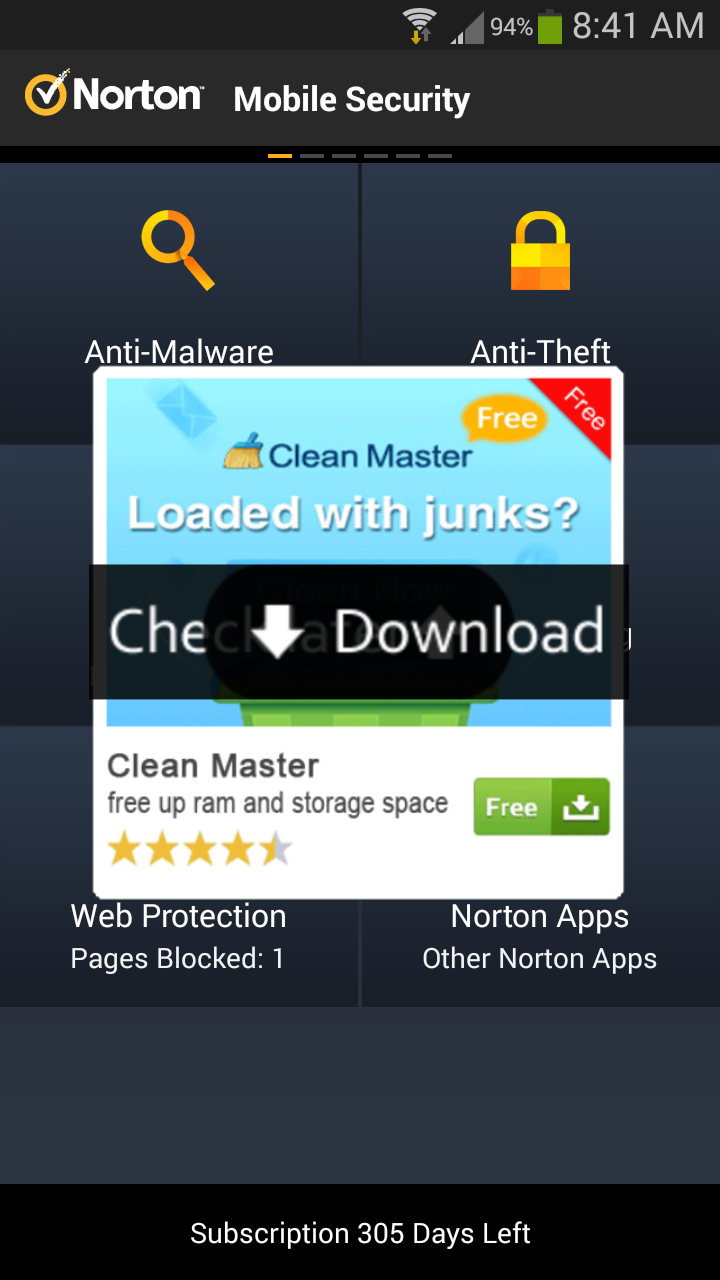 I would like to tell you the saga of how I got infected and lessons learned.  It's a bit lengthy, but for those of you who might not not want to spend the time, I'll cut right to the chase.

At $29.95 a year, Norton Mobile is probably one of the most expensive apps the average user will buy, but if you ask me it is a waste of money. For me, it performed woefully compared to SeCore Antivirus, which offers the lite version for FREE.

I also learned an important lesson about a very popular and highly rated free app, but you will have to read on to find out more about that.

It started about a week ago, when my phone began suffering from aggressive pop-ups that would show up at random times. There was on way to close the pop-ups and the ads would stay on the screen until you clicked on them.  When you clicked them one of a number of things would happen.  In once case, it would automatically, without my permission, download a app called Mobogenie.  In another case, it would to the glispa.com marketing website, which would immediately redirect me to to Google Play to download the software in the ad.  Other times it would go to a website or directly to Google Play.

The only real harm done was the time wasted in deleting Mobogie from the download folder and the process of backing out of the process and getting back to what you wanted to do on the phone.  Incidentally, if you don't delete Mobogenie, they will continue to back up in your download folder.

Yesterday, I went to the Norton website and started a chat with a support agent, a process that resulted in nothing but frustration.  After going through steps that I had already taken without the aid of the script he was probably using, his solution was to do a factory reset on my phone.

I have 135 apps installed and I told him I didn't pay $29.95 to be told that the solution was to wipe a year's worth of software off my phone and then spend days reinstalling it.

At that point, he said he would escalate my call to the next level tech support and that after 2 hours they would call me to solve my problem.  Here is that full chat LINK,  That was YESTERDAY and I did not receive a call.  Perhaps tech the next level support is on Venus.  A day there is 243 Earth days.  In that case, I can expect a call sometime after March 15th.

While I was waiting, I decided to look for other software that might solve my problem.  After downloading and trying a few, I found SeCore.  When I installed an ran a scan, it picked up one virus and eight pieces of aggressive ad-ware.

I allowed SeCore to remove the virus and questionable apps, and my problem was solved.  Right after posting this, I will remove Norton Mobile from my phone and upgrade to the full version  SeCore.

If Norton's second level tech support calls from Venus sometime after March 15, I may update this blog.  Until then, don't waste your money on Norton Mobile!
Posted by Art at 7:37 AM No comments: