Hanes NOT Your Way!

Let me start off by saying that both my wife and I love Hanes underwear.  However, right now I am in the midst of the worst (translate: most frustrating)  online buying experience I have had in  35 years!  Yes, that's right, 35 years. I've  been buying and selling online since 1980, long before the Internet.  Those were the computer bulletin board (BBS) and 200 baud modem days.

But enough of ancient history.  Let's get to my current problem.  On January 22, my wife received an email ad from Hanes and asked me to order three long-sleeve  T-shirts for her.  I liked the sale as well, and ordered three for myself. 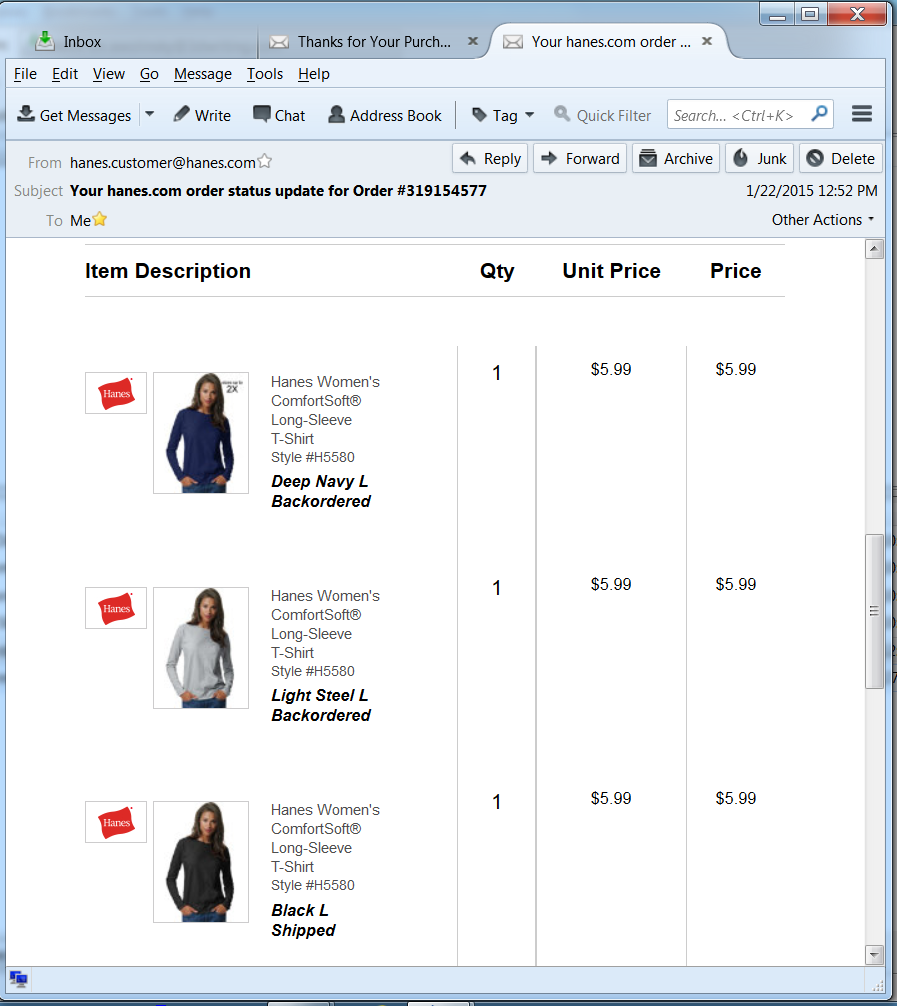 As you can see here, the order shipped the SAME day, but two of the items were back ordered.  The site indicated delivery would be in 6-10 days.  No problem.  That's typical, but most things I order come in well before that time.  Not so this time.

Two weeks passed and I begin trying to find out where our shirts were.  To make a long story shorter, at about the 3 week point it was determined that they were lost and they were re-shipped. (I'm not writing about the frustration I had to get this done.) To their credit, the replacement order arrived within the expected time.

Remember, it was my wife who initiated the request and the two shirts that were back ordered were for her.  She was being very patient about it, but I was feeling guilty about getting and wearing mine while she was waiting. 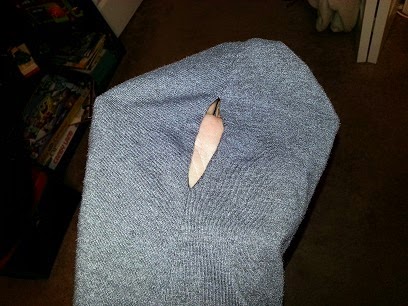 I like the fit, but there was another problem that surfaced the very first time I wore the gray T-shirt.  This picture clearly explains it.   Incidentally, up to this point I have not mentioned the problem with the hole in the seam on any of my phone calls.  I wasn't going to confuse the issue with another problem, before the first one was dealt with.

Additionally, it's one thing to be wearing my order before my wife's arrives, but after 45 years of marriage, I know it would not be in my best interest to have a replacement arrive for my shirts before we resolve the original issue.

In the coming days, I kept trying to find out when the back-ordered items would arrive.  I checked the website for updates and called their help line, with no definitive results. So last week, with a rising frustration level, I once again contacted the order center and tried to determine when her shirts would arrive.  This time, the agent assured me that they would arrive by March 2 (only 43 days after the original order).  At least I had a promised delivery date. 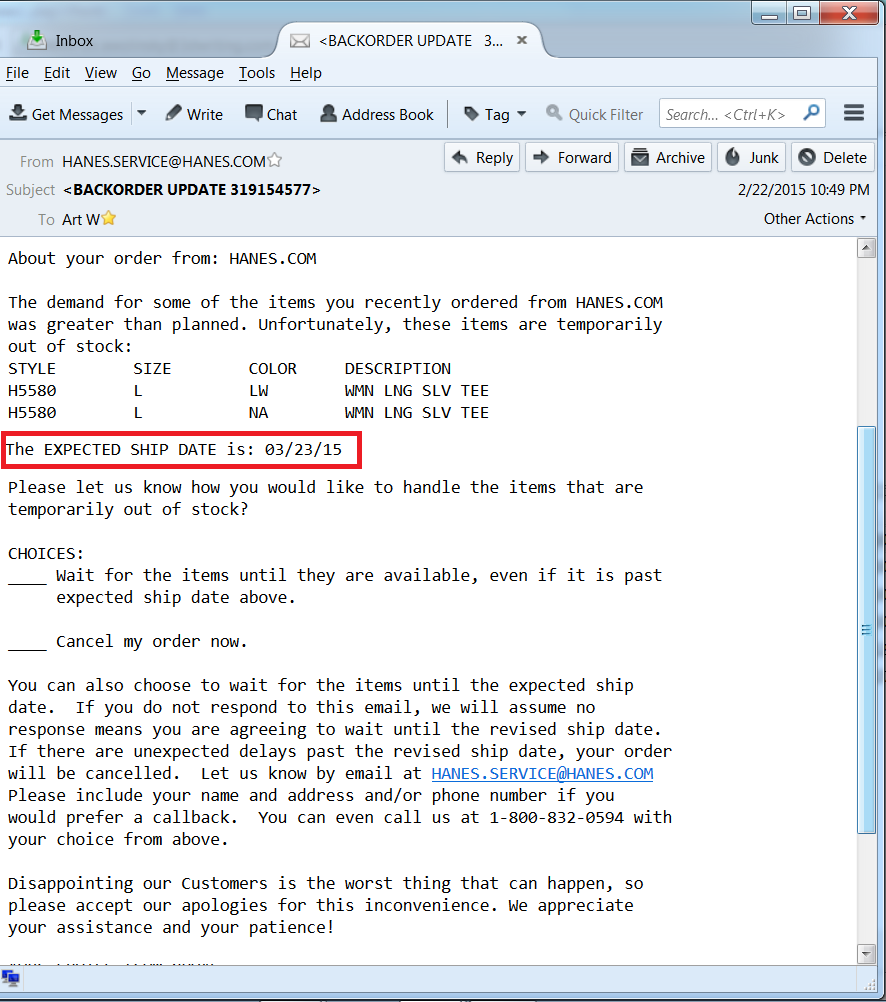 My frustration level was going down until last night when I got this email. As you can see, the promised March 2 delivery date is now MARCH 23!  The email continues by giving me the option of canceling the order or waiting.  Well, isn't that special?

You can imagine what the frustration meter was reading at this point, but before the night was over, it would continue to rise.

I went to the website and saw they were still selling the same T-shirt which at this point, would be delivered 60 days after my original order! I called once more trying to find out how they can promise one date and then change that date, and how they could be selling shirts to others while mine (and other customers') were back ordered and being delivered two months after being ordered. The explanation I received was that other colors were still available and that I should contact customer service during regular business hours.

The frustration level was rising, but it had yet to peak.  After hanging up, I went back to the website and did a bit of checking.   I saw that yes indeed, black was in stock, but just about everything else would be a back-order.  That didn't put me over the top, but what did peg the needle was when I saw the projected delivery date of MARCH 9!

How the hell could they promise people who ordered today, a delivery by March 9.  I (and others) ordered on January 22 and my order is now supposed to arrive on March 23?

Fast forward to today and my call to customer service.  I just got off of the phone with them and they took the frustration level down perhaps a notch or two by explaining that the email I received is automatically generated 30 days after an item is ordered.  (If that fact was included anywhere in the email, it would have been nice.)

So let me see if I can give a Reader's Digest recap...
Ordered 1/22 with a 6-10 day delivery schedule
Order lost
Order replaced and delivered with two items back-ordered
One item damaged
Call on 2/10 promises back ordered items by March 2
On 2/22 an email now promises March 23 instead of March 2
On 2/23 the website projecting a March 9 ship date for new orders
Multiple calls, conflicting information, promises made and broken
Lots of frustration!

Now with all that said, this problem is trivial when you consider wars, famine, starvation, and global warming.  So I'm not going ballistic and I'm not going to stop wearing Hanes underwear, but this does represent a serious issue with customer service, communication internally for Hanes and externally with their customers. 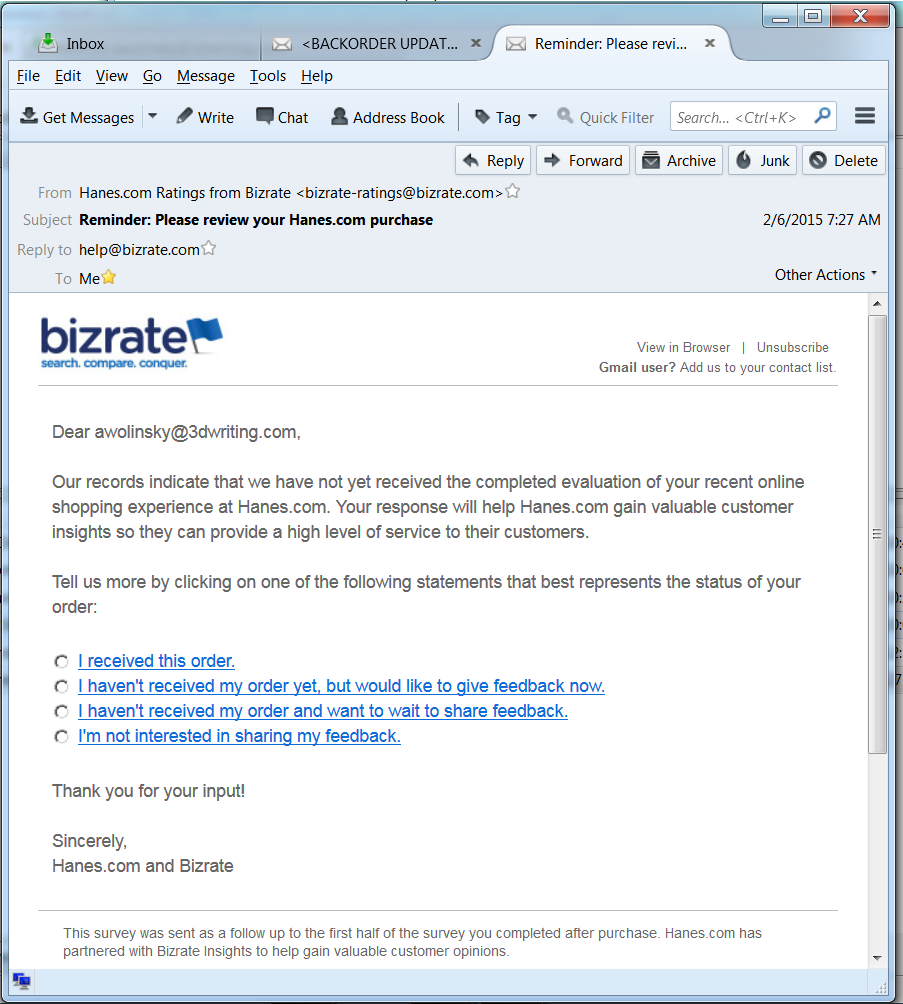 What is happening to me must be happening to hundreds, if not thousands of other customers.  Every call I made started out with standard disclaimer that the call would be recorded for customer satisfaction.  I certainly hope someone at Hanes is listening to my calls!  In the meantime I will do a little online posting to Facebook, answer this customer satisfaction email I received the other day,  and supply this link.

Maybe my wife will receive her LONG-SLEEVE T-shirts in time to wear for the 4th of July celebration.  We can always hope for a cool summer!
Posted by Art at 11:49 AM 2 comments: