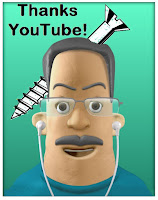 Thanks, YouTube! You shut me and other loyal YouTubers off without any recourse. A lot of small YouTube content providers like me are feeling this way, because you changed your partnership rules. In order for me to make money, my videos must be viewed at least 4,000 hours in the past year and my channel must have 1000 subscribers.

I've been posting since 2005, when you first opened your doors.  Just by the brute force of multiple posts, and a few videos that are popular, my videos have been viewed close to 12,000 hours in the past year, but because I never promoted my channel and hardly even added subscribe buttons to the videos I only have 483 subscribers.

My videos were and always will be about anything and everything. Most of them were for family, friends, or students. I would get a real kick out of seeing any video get over 100 views.  I've posted and removed hundreds of videos over the years. I didn't create them with the idea that I would make money. I never even thought about actively promoting my channel. Even so, I've made a few hundred dollars, most of which was passed on to charity.

It's hardly the end of the world, but you are forcing me to change the way I post. I will adjust and now that I know subscribers are important, I will do what I must to gather them, but you've taken some of the joy and fun out of how I use YouTube.

I will narrow the focus of my channel to videos that I think have general appeal.  Instead of public posts on any and all topic. I will stick to wildlife, recipes, and a few other topics.  All the rest will be unlisted videos that will be shared with a smaller target audience who might be interested in my grandson or the growth of perennial rye grass.

So in a shameless act of self promotion, I will now ask you to subscribe to my channel.
Here's a link to my channel where you can help by subscribing.

If YouTube did the same thing to you, feel free to share your story and a link to your page in the comments.

It was 1970, and I was one of 15 teachers sitting in a large circle in the faculty room at Fairleigh-Dickinson University. Superintendent Bob Linette of Rockaway township was our professor. After asking up what we thought of the American educational system, one by one, he asked us to respond. I was the last to answer. After hearing 14 people sing the praised of our system, he said, "Mr. Wolinsky?"

I swallowed hard and said, "I think it stinks.."  The collective gasp in the room was audible.  Bob's response was to ask me to explain. I said that we were supposed to be preparing students for life, but we weren't teaching life skills. Life wasn't broken down into 1 hour subjects. The was no math part of my day, not science part, no social studies part. Life is problem solving, communication, and collaboration, but none of those things were what school was about.

His response was simple. He said, "You're absolutely right." Those few minutes validated what I felt throughout my high school and college years, and formed the based of my work for the next forty years. From that day on, I taught to give the kids what they needed and deserved, rather than what the system dictated and worked to try to change the system.

That often put me at odds with my colleagues and administrators. In my early days, I got the reputation as a radical nut, but 20 years later I found myself, like Bob Linette, working with teachers who were entering education. During one workshop a teacher asked me how I made the switch from the sage on the stage to the guide on the side. I told her I never made the change, because I never changed. The only thing that changed was the label. I was teaching that way since 1970.  The only difference was that back then I was a radical nut, and the previous week someone had called me a visionary.

Fast forward to 2018, and the pendulum of change is swinging slowly. There is no denying that the skills needed for today's world are at odds with the form and function of many or our schools, but change is often painfully slow! It only took 50 years for the chalkboard to go from prototype to common place, and 25 year for the overhead projector to make it from the bowling alley to the classroom.

Many schools are recognizing the importance of communication, collaboration, problem solving and project based learning.  This video is actually from India, it is just one of any number of countries who are moving toward 21st century education faster than we are.


Next Saturday, here in Raymond, New Hampshire, citizens have a chance to weigh in on the school budget at the 10:00 AM deliberative session. I know for a fact that people will be there arguing that the budget needs to be cut. While I support the budget, I completely understand their desire to keep taxes down, I am a serious odds with some of the rationale for doing that. They will point to graduation rates and test scores, but neither is indicative of what it going on in our schools.

Remember, change is slow. Over the past 5 years or so, our schools have been changing from teacher delivered instruction to problem and project based learning that develops the competencies needed for 21st century life. Evaluation is changing from one size fits all numeric and bubble sheet testing, to competency based assessment, that measures internalized skills rather than arbitrary memorized facts.

We have a new superintendent, a new curriculum director, and a new technology director.  All of them are well versed and committed to the necessary change, but as a community we need to support that change and give it time to take hold.

I implore those who are concerned with taxes AND education, to learn more about school change and how it is being implemented and do whatever you can to support that change.  On of my contentions is that we are being held hostage by a multi-billion dollar testing industry that is hold us back, because it the kind of assessment needed for the 21st century is bad for their bottom line.

Einstein said, "Everyone is a genius. But if you judge a fish by its ability to climb a tree, it will live its whole life believing that it is stupid."
Posted by Art at 10:34 AM 2 comments: