(This article was originally posted around April 2017. After reading it, I realize it is relevant today. As a result, I've making some minor adjustments to bring it up to date and am posting it once again.) 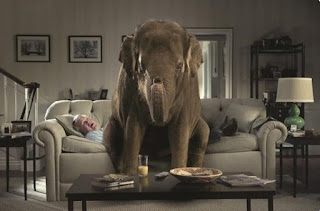 Let me start by saying what you read here is my personal opinion.  I was a member of the committee that reviewed the rules and by-laws early in the year and published the results in February of 2017.  In this post, I do not speak on behalf of anyone else.  However, I was privy to the entire process by which the committee wrote its report. There and in this article, I was drawing my past experience and current research, much of which I continued after the publishing of the committee report

I had a combined 10 years on the grievance committee and contract negotiating committee of a large regional school district. I spent three years as the VP of the teachers' association, six years on the Sherwood Glen board (3 as President), and attended dozens of workshops and hundreds of meetings associated with those roles. I've been involved with about two dozen legal actions and arbitrations concerning boards of education and this condo board. I've also been behind the control panel at RCTV during dozens of town meetings and have observed the process by which business is conducted.

That being said, let's start by addressing the elephant in the room.  The rules have been examined and amended numerous times since they were written. They have remained largely unchanged.  The section on ornamentation, to the best of my knowledge has remained relatively unchanged.  There have been times when boards discussed removing some of the prohibitions, but felt is was ill-advised, because they had been established and reaffirmed by previous boards.

However, there were some significant ornamentation related changes to the Commons and Grounds section. The bird feeder rules were changed in response to a rodent issue, and though not officially adopted as a rules change, the board did add adopt guidelines for ornamentation along the edge on the pond. Both changes were made with considerable input from the community, and in the case of pond side ornamentation, the Rockingham County Conservation Commission was consulted.

The changes were implemented, because the rules at that time, were not clear about enforcement of these situations. In order to do what the board felt was right for the community, they they had to  change the rules, but is was not done unilaterally. It was ALWAYS done in public, with public input, and according methods prescribe in the condominium governing documents and state law. It was and is the board's ultimate decision as to changing the rules, but residents were given ample opportunity for input and were well aware of any upcoming enforcement.

If conditions are such that they require a rules change, the board should make the required change with resident input over an appropriate period of time to ensure they are doing what is best for the community.

The decision should be made based on solid research that indicates the need for the change.  For example, the board received complaints about rat sightings. The board acted quickly to deal with the immediate rodent issue and then conducted extensive research to effect a long term solution.The board discussed the need to change the bird feeder rules.  There was disagreement during the discussion, both in the community and on the board, but eventually a consensus was reached and the rules were changed.

A similar process took place for the pond-side ornamentation issue, but unlike the rat situation, there was no time sensitivity or safety issues.  This allowed the board to explore the situation even more thoroughly, bring in the Rockingham County Conservation Commission, and to craft the guidelines in consultation with residents.

After examining the rules, the committee came to the conclusion that the rules were reviewed many times in the past and changed as needed.  The question here was whether the area between the back and the conservation land was to be considered berms or commons.  It was determined to be common land. Prohibitions were clear and unambiguous.  However, it was perfectly clear that past boards were lax in enforcing many of those obvious violations.

A choice could be made to allow ornamentation in that area or return it to its natural state.  After consulting with the RCCC, and researching how conservation land around the state was developed to encourage community use, it was decided to create guidelines that would encourage use, protect the pond, roll back some of the changes that were made, and grandfather others. Guidelines were changed so that it could be made clear to future residents what was and was not permitted in that area.

It is the board's obligation to enforce the rules and the community standards. The prohibitions in the rules are clear. However, it is equally clear that ornamentation IS allowed.  In cases where a clear prohibition is not apparent, a judge or arbitrator will always look at past practice, community standards, and culture that established the norms over the years. Boards need to tread lightly when it comes to gray areas.  At the very least, they must be able to defend their enforcement of ANY rule by citing clear reasons for doing so.


Residents have no choice but to accept board enforcement of items clearly defined by the rules. However, when it come to enforcing ornamentation that they deem acceptable or unacceptable, the board cannot impose their interpretation of what is and isn't appropriate without experiencing considerable resistance or legal challenges.  If they do so without previous public discussion and in violation of by-laws and HB 353, if challenged, the board actions will be unenforceable.

Aside from adhering to by-laws and HB 353, open communication is critical.  Meetings without the public in attendance have been a problem a number of times over the past 7 years or my residency here at Sherwood Glen.  Beginning in 2010, with the establishment of the Website and the publishing of periodic bulletins, boards began a conscious effort to improve transparency.  That trend seems to have been reversed in May 2016 and is in part responsible to the current concerns.

This became a problem when the past two presidents opted to began enforcing all of the prohibitions without due process, inadequate public input, and at unadvertised and undocumented meetings. Enforcing rules is their right and responsibility, but without due process, the actions may be unenforceable. By not including the public they ended up enforcing things that at the very least, were contrary to community opinion and at the worse, violations of by-laws and HB 353, which would make them unenforceable.

Below is a chart which details the communications between the board and the community since 2012. The 2017 figures are only accurate to the extent that they are projections based on currently advertised meetings and other communications.  I hope these figures changes with as the board seeks to be more communicative and transparent. 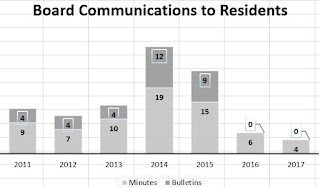 (Note:2017 communications did improve after the filing of the Rules Review Committee Report and are now reflected in the chart which was published on the Sherwood Glen Facebook page the SherwoodGlen blog.)

The problem has been compounded by the fact that the board was acting between quarterly meetings in violation of by-laws and New Hampshire HB 353. That is also detailed in the report.  This is not a conclusion arrived at by the committee simply through reading the documents cited. Informal contacts with attorneys and town officials were made as well. I will stress here as was stated in the report, I do not feel this was done intentionally. It was most likely through inexperience and a lack of understanding of the processes.

The situation that existed which allowed this controversy to develop could have been avoided if the board followed the by-laws and HB 353. BOTH call for properly advertised meetings. BOTH require minutes. Open meetings require public input.  Meetings at which the public is not invited, under HB 353, MUST be recorded an available for residents to inspect.

With the update of HB 353, any board should realize that holding an open meeting with public input is probably a better option than holding a meeting without the public, especially if the action is going to be controversial.  The only official record of a public meeting likely to exist are the minutes or other printed documentation. The recording of a meeting in which the public is not invited, is a word for word recording of the entire meeting.

Any action taken by a board outside the provisions of the by-laws and HB 353, are basically unenforceable. Regardless of the violation cited and action taken, they could be challenged in much the same way any criminal defense attorney would challenge evidence obtained illegally.  It would be thrown out of court, if it got that far.

The board must conduct all non-emergency business in public, properly advertising them, and allowing the input of residents.  Recognizing the amount of actions and board business that had previously been conducted outside the guidelines of the by-laws and HB 353, the 2017-2018 board stated they will be scheduling montly public meetings along with the quarterly meetings.

This becomes particularly important, because much, if not all of the business previously conducted in violation of by-laws and HB 353, is subject to challenge.The 2017-2018 board needs to revisit items not handled according to prescribe procedures.  Otherwise, past actions would leave the current board vulnerable to legal challenge on things that would otherwise be within their rights to enforce.

The previous board has done much that is positive. Some of the actions taken outside of prescribed procedure are positive in nature, and would be approved had they been discussed in public. They will likely remain unchallenged. Some are not so clear cut and may well have result the new board revisiting the actions and re-mediating as needed.

Moving forward, the new board has many options and opportunities to heal the current rift. I encourage a course correction that will restore harmony in the community and trust in the board.
Posted by Art at 8:01 PM No comments: