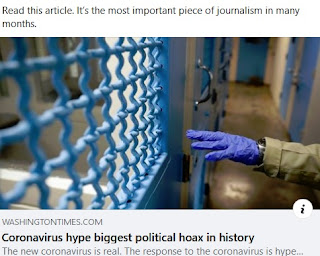 Someone just posted a link to this article and said, "Read this article. It’s the most important piece of journalism in many months." I read it, but my opinion was considerably different than that of the poster.

It references the video of a press conference conducted by Dr. Dan Erickson and Dr. Artin Massihi. They run an urgent care center in Kern County, California

The video was taken down from YouTube because it violated community standards, which is a debate for another day. If you want to watch it, you can view it here.

I responded with as follows.

Let me start by saying I am not a sheeple. During my 40 years of teaching, I've held many different positions in math, science and technology. If anyone asked me what I taught, my answer was the same. I taught critical thinking. I gave extra credit to any student who caught me in an error. I encouraged them to check anything and everything they see and hear.

I read the article and I watched the Erichson video 3 times. I was tempted to created a point by point rebuttal, because when you pause to digest what they are saying, it's what they are not saying that tells a big part of the story. Then I thought, why should I spend 4-6 hours putting together a 2 hour video that no one would watch? I'll just spend an hour writing this reply and hope that at least one person reads it.

I'll just focus on single point on which they hinge their entire argument. If you accept it, at face value, I urge you to reexamine the sheeple comment.

First, I'll cut to my conclusion. Is covid as bad as we first thought? I don't think so, but I have no idea how bad it really is. I do know it is not as rosy optimistic as the picture they are painting. Are we ready to open? No.

The first time I watched the video, I had to stop it when they said there was a .003% chance of dying if you get covid. That is 100x lower than the lowest estimate I have seen anywhere.
So I started running my own calculations using the exact same method they used, which happens to be basic 7th grade math. That itself is a huge red flag. I remember my college genetics final. It was a single question that was 2 hours worth of calculations using calculus. What scientist worth their degree would do calculations of a situations that complex while ignoring all of the variables?

How irresponsible is it to ignore date from other places around the county? Those figures are there to use. Why ignore them? Any 7th grader can do the calculations the way they did and come up with considerably different results than they did, but once again their method of calculation is seriously flawed.

They were basing their figures on Kern county figures and extrapolating for then entire state, and then for the entire nation. Do you know how ludicrous that is?

They said, in Kern county they have tested 5,213. What they didn't say is that represented just 0.6% of Kern county. There is no mention of the demographics of the population or the test sample. The entire state of California has tested only 0.7% of the state.

So I started pulling statistics from around the country and the world to see how things compared. Needless to say, every one showed higher death rates than their calculations, keeping in mind, that is using their method.

Am I right? I can't say for sure, but you will have to prove me wrong to get any credit at all, let alone extra credit. If you prove me wrong, I'll be happy to change my opinion.
Posted by Art at 12:18 AM No comments: