We are not frozen pizza people, but we do love mushrooms and spinach.  Last night, my wife saw a commercial for Freschetta Portabella and Spinach Pizza.  She thought it looked good, so we decided to give it a try.

It was our first time trying Freschetta pizza. The box says, "New Look! Same Great Taste!"   When I opened the package, the first think I realized was there was no tomato sauce.  My first question was, "Where's the tomato sauce?"

My Bad! I made the mistake of not looking closely when I picked it up.  I'm not a fan of white pizza.. My taste buds were primed for tomato sauce and I knew that would effect my evaluation of the taste.

The  second question that came to mind was, "Is the new look a pizza covered only 3/4 with spinach and mushrooms?" 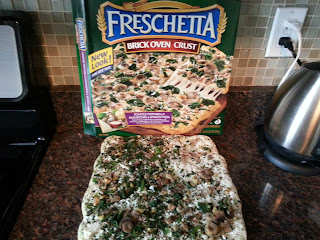 I seriously doubt that is the cases, but it certainly is a quality control issue.  In this case, does it mean I have 25% less topping than I should have or does it mean that the rest of the pizza has more topping than it is supposed to have?  Not knowing the answer to that question, I put it in the oven and prepared to sample the "Same Great Taste!"

The instructions said 15-19 minutes.  I set the time on 17 minutes and started to write this blog.  After getting pulled away, the next thing I knew, the time went off.  When I took it out of the oven, it was obvious, that I overcooked it.  It wasn't burned, but it was crispier than either of us would have like.  Once again, my bad! 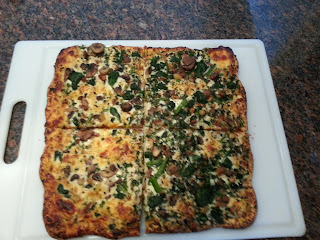 It's difficult to evaluation on an overcooked pizza, especially not knowing whether it had the right amount of topping on it.  That being said, the "Same Great Taste!" was pretty good.  It was better than many frozen pizzas we have tried in the past, but it was still obviously a frozen pizza.

My wife is much more of a garlic person than I am, and the garlic was obvious from the moment I put it in the oven. The 25% of the the pizza that didn't have much in the way of spinach and mushrooms was obviously not as good as the rest of the pizza.  The garlic and onion sauce took over that portion of the pizza.

As I said before, we are not frozen pizza people and Freschetta Roasted Mushroom and Spinach Pizza did very little to convert us.  We'll  stick to fresh cooked pizza.

Upon re-reading this entry, one more thing is obvious.  I obviously use obviously too many times, but I'm obviously not going to go back and fix it, because clearly I'm to lazy. (Bet you thought I was going to say,  Obviously, I'm too lazy."

Remembering Ernie Kovacs at 3:00 AM

At 3:00 AM, I woke up to something that smells like old socks in my CPAP mask.  After taking it off, I realized the smell was the result of my forgetting to put water into the humidifier.  Not being able to go back to sleep, I headed to the sink to clean it with soap and water.

From there I sat down at the computer and saw that someone had put a comment on my YouTube video of my grandmothers Hungarian stuffed cabbage recipe. She mentioned that her mother was the "Capusta Queen", capusta being the Hungarian word for cabbage.

That brought back a flood of memories of my youth and growing up in a Hungarian home.The first memory was of the Ernie Kovacs show and one of my favorite segments, the Kapusta Kid in Outer Space.  Here, right after the Sid Cesar commercial., is one episode.


But that was just one memory.  My mother went to Trenton High with Ernie and as I got older, she would let me in on the secret of why the family would laugh so much at things I didn't understand or see as funny.

Being Hungarian, Ernie would sometimes include references that only the Hungarian community would catch.  The Kapusta Kid (Cabbage Kid) was just one innocent reference.  Others were not quite as innocent.  Take for instance, the episode where Kapusta was asked were he had been and responded that he was around the corner at the curve house. I think there were probably three cracked ribs in our family as they laughed hysterically.

Year's later it came up in a conversation and I asked what was so funny.  Everyone remembered that episode.  Mom explained that when Kapusta said he was around the corner at the curved house, it was a play on the Hungarian words kurva haz.  I'll let you check out Google Translator to see the Hungarian to English translation and understand what kind of things were often going on between the lines on the Ernie Kovacs Show.

Ernie was a genius and a classic!

Anti-gun advocates are going to try to make fodder out of the fact that America's top sniper was killed on a gun range, but if I'm correct they are as inaccurate in their assessment as Chris was accurate in his sniping. There are no details of the shooting, but I'm going to speculate that Chris never saw what was coming.

I belong to a gun club where the range safety rules are CLEAR and STRICT. When on a rifle range, there is always a range officer in charge.  If an official club officer is there, they are in charge. If a club officer is not there, the first person on the range becomes the range officer. Every member of the club is trained in range safety rules and procedures before they are accepted into the club.

The range officer declares the range either hot or cold and there is a red and green light that is used along with the verbal commands.  When a range is hot, there is no one down range and people can load and shoot.

A range is cold when it is time to set and/or check targets. At that point the range officer declares the range cold and tell as shooters to cease fire and make guns safe.  He is responsible to make sure all people have stopped shooting, removed their magazines, cleared the chambers, and placed the guns on the table next to them in an open, safe position.  When the range is cold, you can't even handle ammunition to load a magazine.

Only then does the range officer declare that it is safe to go down range to check targets.  Those doing so, go down range unarmed.  My guess is that Chris Kelly and Chad Littlefield were going down range, UNARMED, when the alleged murderer, Eddie Ray Routh, opened fire in violation of gun club safety rules, as well as state and federal laws.

I would not at all be surprised to find that one or both of them were shot in the back.

Once again, this is NOT a gun control issue. It is a MENTAL HEALTH issue.

UPDATE 2/5/13 - As I speculated, this appear to be more of a mental health issue than a gun issue. Kyle was trying to help a PTSD victim, something he had done in the past.  As a sniper, his kills of insurgents most certainly saved hundreds of U.S. lives. To try to use this tragedy into an anti-gun agenda item does a disservice to Chris and all those who serve our country.
Posted by Art at 11:38 AM No comments: