In 9th grade, my favorite class was wood shop, but I was in the college track and there would be no way for me to pursue my interest in high school. I often said that if I hadn't gone to college, wood working would have been my path of choice.

Well now that I am retired, that path is open to me. For the past 40 years, I have had to made do with the basics. I had a decent collection of hand tools, a power drill, circular saw, table saw, but that was about it. If I had a job to do, I used what I had, borrowed, or rented, but now it's time to get the right tools for the jos which I'll write about in an upcoming post

Literally every one of the tools paid for itself after the first or second use, including the nail gun, but the nail gun was the only tool that turned out to be a huge disappointment.

It jammed once or twice and I always had to finish the last quarter inch of the nail with a hammer, but hey what do I know. I never used a nail gun before and figured since it's electric rather than the professional air compressor type, that's not unusual. It was still a hundred times better than driving them in by hand.

Two days ago, I was using it to build some storage bins. About a dozen brads into the project a spark few out of the top and the gun died. I took it back yesterday and exchanged it. A half dozen nails later, the new one broke.

What's going on here. I told Jill and being the ever practical shopper that she is, she suggested that I check it out on the Internet to see what the story was. I found 30 reviews on Amazon and 24 of them were negative, with 21 of the 24 gaving it one star. I have never seen a product that badly reviewed.

So it was back to Home Depot to get the right tool for the job. It was the $59 Arrow vs the $189 Porter Cable air compressor and brad gun combination. I wondered how much difference the extra $130 would make. After using it, I would guess it made at least $200 worth of difference. Aside from the nail gun, there are loads of other uses for the air compressor.

I spent another $15 and got the tire inflation kit. Hey and if I get a tire changing machine and lug wrench gun I can complete with Mr. Goodwrench. Hmmmmmm... I'm beginning to wonder if I'm in need of some sort of intervention.
Posted by Art at 11:36 AM 1 comment:

According to Science & Spirit magazine, Scientist at Los Alamos Labs have confirmed that ordinary honey bees can sniff out explosives even in amounts as minute as a few parts per trillion. This poises them to be right on the front line in the fight against terrorism.

Bees are strapped to small boards and exposed to the scent of explosives. They are then rewarded with honey and water. Very quickly, like Pavalov's dogs, they learn to associate the smell with the reward and stick out their tongues whenever they smell explosives.

Scientists explain the the bees are comfortable in their holder and are unharmed. When they finish their tour of duty, they are returned to the hive where they live out the rest of their lives.

The article doesn't go into any detail about how the bees will be trained and deployed in greater numbers, but based on past history, I've provided a little speculation.

The fact that the research was done at Los Alamos leads me to believe the government will give lucrative no bid contracts to Blackwater for training the bees. There will be major costs associated with fitting them with proper uniforms and I shutter to see the invoices for the honey and water used in the training. It has to be at least $1500 a gallon.

Of course, not all bees are patriotic and some might resist the training efforts. However, the boards to which they are attached will be specially designed to flip over easily. Since the bees are already strapped to boards and it is a simple matter to turn them over and then utilize the water meant for the sugar as incentive to cooperate.

It may not be long before bees organize when they realize what it happening and rather than sticking their tongues out when they smell explosives, they may stick them out at random times in order to confuse and taunt their trainers.

Returning to the hive after their tour of duty is not necessarily in the cards. With the high cost of training, it is likely that their tours will be extended two or three times and large numbers of bees may never make it back at all and others may elect to become private contractors, thus giving rise to another industry; the manufacture and sale of stylish sun glasses for their multi-faceted eyes.
Posted by Art at 5:18 PM No comments:

Net Nutrality and Me

There has been a lot of discussion on the IP mailing list about Comcast allegedly improperly throttling back some user accounts who have been using bit torrent and peer to peer technologies to transfer large or multiple files. Comcast denies they are doing that but critics are not convinced.

Up until this week, I was taking a neutral stance on the issue, but something happened to me personally to tip the scales.

I've had intermittent problems with FTP over the year, but usually it's something that resolves itself in a few hours or over night, but this week was different. All of a sudden it was if I had turned on a water hose and then someone put their foot on it. A packet would go out and then my connection would be at a stand still. Eventually another packet would go and on it went. The net result was either a failed upload or an upload that made me year for the good old days of two hundred baud acoustic couplers.

I endured this for three days thinking it would clear up. Finally, I called tech support. Unfortunately they didn't have any appointments for six more days. I made my appointment. I waited a few more hours and then called again to see if perhaps there was a cancellation and I could get an earlier service call.

This time I explained that I was creating a course for a major university and my tutorial files had to get uploaded. Lo and behold, I was in luck. The very next day, there was not just one opening. I had my choice of visits, 9-11, 11-1, 1-3, or 3-5. Gee, what an amazing coincidence.

So what happened? Well here's one possibility. The tutorials I was uploaded were created with software that adds mp3 files for each slide. As a result, in a period of a few days, I had uploaded hundreds of mp3 files that were incorporated into the tutorials. Could it be that these mp3 files tripped some sort of alarm that resulted in my account being throttled? Could it be that when I called and explained that I was not some teeny-bopper pirating music that they took the foot off the garden hose? I have no way of knowing, but it is certainly a coincidence.

I'll watch for a repair man. If he comes, we'll chat and I'll add a follow up to this entry. Anyone want to make book on whether there is a follow up?
Posted by Art at 9:44 AM No comments:

That's Why They Have Email Verification

The subject line was "Welcome to MySpace" and the message began:
Hi Andrea -- Thanks for joining MySpace!
Here's your account info for logging in:
E-mail: AWOLINSKY_@_COMCAST.NET
Password: *******

It went on to provide a link for me to confirm the email address and open the account. I'd better make sure that I don't click the confirmation link or whoever set up the account is in business.

Ok, that's one of my email addresses, but my name isn't Andrea and I didn't open a MySpace account. What's going on? Is someone impersonating me? No, they're using my address and a different name. That's why the confirmation email came to my address. Lemme see what's going on here. I think I'll log in with the information provided in the confirmation message.

After I login, I go directly to the profile the person set up. Andrea says she's a 27 year old female from Cambridge, MA and that's all she has, but that's more than enough.

I'm going to assume that Andrea just made a typo on her email address. If her last name wasn't Wolinsky, I would have just gone to the account and canceled it and let her figure out what was going wrong, but I couldn't do that to someone with such a regal last name. :-)

With the little information she left, in about a minute, in a single search I was able to determine that she lived with her parents. I had their names, address, ages, and her phone number. A phone call and an email straightened thing out, but it just goes to show how things can go south in a serious way with the unintentional sharing of information.

In the end, no harm was done, everyone had a good chuckle, and I have another anecdote to tell in my presentations.
Posted by Art at 11:53 PM No comments:

No, I haven't become a world traveler like my son, but today I breakfast at the Vienna Inn in Vienna, VA. 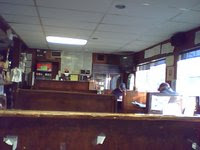 The inn first opened its doors in 1925 as an ice cream parlor, later it became a cafe and in 1960 it was purchased by Mike Abraham and renamed the Vienna Inn. It's colorful history including being voted one of the 200 best drinking establishments in US in 1984, is well documented at their web site.

The building is basically unchanged as are the tables, chairs, and booths which appear to be original, are obviously well past their prime, but the atmosphere is still there and the breakfast was home just the way mom would make it. After two days at a technology conference in Arlington, it was a delightful change of atmosphere and cuisine.
Posted by Art at 6:02 PM No comments: 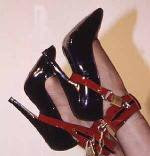 It's 3:45 AM and I've been having trouble sleeping tonight. I was going to give it another try, but first I checked my mail, a nasty habit. Among the spam was a name on a from line that started me laughing and if I don't stop, I'll be awake for the rest of the night.

The name was Francisco Hawkins and he was selling me Prada shoes.

I know it's just the hour, but the picture of a suave, Spanish hillbilly, shoe salesman slipping a pair of size 10 1/2 Prada heels on to my foot is going through my brain (what's left of it). At least they are a color that compliments my mustache.

On that note, I'll try to get some sleep. I'm not sure whether I'm looking forward to dreaming or dreading it.
Posted by Art at 3:45 AM 1 comment: