Last night I attended a non-partisan campaign finance forum at IGHMS, sponsored by the Raymond Democratic Organizing Committee. The event was organized by Nate Bernitz, and moderated by Representative Kathy Hoelzel. The participants were Steve Marchand seated on the right and representing the left, and Greg Moore seated on the left representing the right. They both agree that the system is broken, but disagree considerably on what should be done about it. 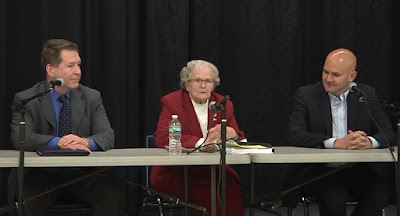 In today's polarized atmosphere it was refreshing to sit for two hours without hearing a single angry word or disparaging remark by either participant or audience member. Each participant focused on their plan rather than denigrating their opponent's plan or attacking them personally. It was the kind of discussion that should be taking place in Concord, in Washington, and online. It can serve as a model for other to follow.

The participants and even the audience members have probably forgotten more about campaign finance than I know. Long ago I was told that a fool is one who knows not, and knows not that he knows not. So I went to learn more. I went to learn from those who did know.

I will tell you up front I went it with a bias. From what I do know, it was my belief that Citizens United was about the worse thing that has happened to our campaign finance system in a very long time. However, I also went it with an open mind. That being said, while I learned a great deal about the complexities of the system, nothing was said that changed my mind.  If anything, I am now more convinced that Citizens United is critically flawed. Let me to tell you a bit about what I learned.

As an illustration of how the current system is broken, Greg Moore spoke about how large corporations often donate considerable money to candidates running against each other when races are close, or supporting the candidate who is most likely to win. He pointed out, it doesn't matter so much who wins. The reason corporations donate here is because when an issue that impacts them is being considered, they want to be able to have the legislator take their calls. (When was the last time you called a state senator and was able to speak directly to them?) By doing this they ensure that they will be heard. This is took place with Northern Pass and other issues.

Steve Marchand pointed out that individuals circumvent the limitations for donations. As an example, he told of one person owns a few dozen Dunkin Donuts in NH. Each store is an LLC. By having each store donate the maximum amount, this one individual was able to donate a few dozen times more than the law intended.

The topic of PACs and SuperPACs came up and I think they both agree that the transparency intended by regulations has become opaque at best. I seem them as black holes for money.

Compounding the issue is the technology used to house the campaign finance information. It is not in the least user friendly and makes it extremely difficult to determine the source of campaign donations.

I have a background in technology and have created systems for large organizations. Trust me when I tell you that is NOT difficult to design a system that is easily searchable. The fact that the Attorney General's data base system is difficult for the public to use is not a question of money or technical difficulty.

When it comes to money influencing votes, Greg Moore stated that the large size of the NH house assured that it could not be bought. He sited a bill that PASSED the Senate by something like 21-3, but FAILED in the house something like 200 and something to 50 something. In my mind, that went a long way toward making the point that the House wasn't bought, but at the same time, it seemed to suggest that we have the best senate that corporate money can buy.

Having the best senate money can buy isn't necessarily a bad thing. We always want the best people in the job, but it seems to me that we can only get the best people for the job if the "buying" is done by the people they represent.  The current system silences the voters.  While the voters are the ones who elect the representative, the huge sums of money being pumped into the system ensure that the candidates are often those who respond to the dollar sign.

Think about the two examples above.  Those thirty Dunkin Donuts have hundreds of employees.  The money made by the owner came from money of his customers and the blood, sweat, and tears of his employees, yet none of us had a say in who got the money. His abuse the system and effectively disenfranchised many of the people who made it possible for him to donate.

In the Northern Pass example, large corporations pumped money into NH from outside the state and had ZERO interest in the well being of our citizens. Their donations drowned out many of the voices from within the state. Yes, I know that Northern Pass failed, which indicates that the system isn't yet fatally flawed, but it was only because of the huge public outcry and the SEC that made the difference.There are plenty of other examples where public outcry was silenced under a ton of money.

Ultimately, ALL campaign money comes from the people. However, much of that money is in the hands of individuals and corporations so that when it is used, it supports their wishes, which are often at odds with the public's.

Having the best government that money can buy is not a bad thing as long as that money has no strings attached. If public money finances all campaigns to the same level, the person being sent to Concord will be the one who has convinced the voters that he or she is the best suited for the job, and once in office they will be accountable to voters and not big money donors and corporations.

Of course I realize that money is just one of the issues impacting votes and there are ample examples of highly financed campaigns failing, but there were other factors at work that overshadowed financing. In many races, financing is what made the difference.  I don't have a solution, but I do have some insights and suggestions based on my experience as one who taught systems thinking and problem solving.

Peter Senge, considered by many as father of systems thinking in business, teaches if a system is seriously broken, you shouldn't try to fix it.  All you will have is a patched system that functions a bit better than before, but won't be the system you want. If a system is seriously broken, it should be rebuilt from the ground up based on the vision of what you want.

I also taught problem solving using the Big6 method. Much problem solving goes astray because the problem or task is improperly defined. In part, that is what is going on here. The problem that needs to be solved should be stated as, "How do we ensure that money does not determine the outcome of elections or the decisions of those who are elected?"

I know there is still much I do not know, and I am more than willing to listen to anyone who can teach me more, but if you disagree with me, the surest way to ensure that I won't listen to you is to attack my position or my person. So sell me your plan or teach me what I don't know, because my mother didn't raise a fool.
Posted by Art at 1:27 PM 1 comment: