Watch Me Get Wired

Fifteen years ago, I had a sleep study done to determine if I had apnea. At that time is was borderline and no action was taken. Over the years, things have not gotten better.  I wake each morning feeling more tired than when I went to bed the night before.  As a result, my doctor sent me to the Eliot Sleep Evaluation Center, but it wasn't at Elliot hospital. In an effort to make things more comfortable, the sleep center occupies an entire wing of the Hilton Homewood Suites in Manchester.

I arrived about 7:30 and checked out my room. It wasn't five stars, but it was infinitely better than the hospital sleep lab where I had my original test. After settling in, my tech came in, introduced herself, and gave me the run down for the night. She was very thorough and friendly. She asked what time I went to sleep, and since I usually go to sleep about 11:30, I would be the last one to get wired for the night.


At about 9:30 she came back in and told me I would be getting wired at about 10:30. Shortly after that, I got into my pajamas, hopped into bed, and turned on the Patriots game. At about 10:45, the techs arrived to wire me up. The process took about 15 minutes, which are condensed in the video below.


After getting wired, they connected me to the equipment, and I settled in to watch the rest of the game. The  Pats blew it and it was lights out. Normally, I sleep on my side. Sleeping on my back without wires, presents a problem to me, but with a few dozen wires attached, it raises the challenge to a whole new level. I think it took about an hour for me to finally fall asleep.

At 6:30 AM, I was awaken and unwired (if that's a word).  I asked the tech what she could tell me.  Of course there won't be any official results until I meet with the doctor next week, but she did tell me that I woke up quite a few times, which depending on how you look at it is good news or bad news. The bad news would be that I do have apnea, but that's also the good news, because it is treatable and I can look forward to more restful nights and some relief.

I showered, went down to the lobby for a very nice breakfast, and headed home.  I'll have more news in about a week.
Posted by Art at 9:45 AM No comments:

Sometimes You Have to Pay the Piper

In January of 2007, I bought a Dell Dimension E520.  Over the years it I have installed and uninstalled literally hundreds of programs.  Right now, I have almost 200 programs installed.

I'm constantly upgrading programs and drivers. I've run into conflicts and a wide range of problems.  I've used Windows system restore many times, bought system organizes, and spent many hours online with tech support from Dell and other software companies.

In most cases we were able to resolve the issues, but time and my abuse took its toll.  As time passed, despite the use of a start-up manage, boot time increased, and about a year ago, little things  that I was not able to fix started going wrong.  For example, when I went to shut down the computer, I would have to do it twice.  Some programs would not launch the first time I double-clicked, or the Firefox process would remain running after closing the browser.

None of these were critical, because I was able to work around each of them.  However, I knew it was just a matter of time before I would have a problem that had to be resolved by someone with more expertise than I.

Then last week, it happened.  A friend asked me to help him with a video file conversion.  I downloaded a product that nailed me with the Babylon Toolbar malware.  After researching it, I tried removing it manually, but with the dozens of registry entries I deleted, I may have done some serious damage.

After the repair, I seemed to be back to where I was before the infection with one exception. None of my Adobe Production Suite programs would run.  With Dreamweaver being my must used program after Firefox and email, I was in trouble.

The last system organizer I purchased was Advanced System Organizer. It was one of the top rated products and it had more tools than I had expertise.  However, I dug into it a bit more, did some registry restoration and optimization, and then started a deep scan for malware.

As the scan progressed, it found 8 infections in the registry and was cranking through the system and program files.  It was a long scan.  By the time it had scanned about 350,000 files, it has picked up 5 more infections, but when it was approaching 400,000 files, I got the blue screen of death!

At the top of the scan screen there was a number for the Premium tech support number.  It was time to bite the bullet and put the computer where it could be handled with a skill set I did not possess.

As it turned out, Advanced System Optimizer uses SmartSupport.com as their next level of tech support.  After speaking with them for a while, they gave me two options.  The first was a one-time tuneup for $99.95 and the second was $249 annual subscription that provided unlimited tech support and unlimited remote tuneups.

I figured if they could get it up and running again, I could keep it going without much trouble, so I opted for the one-time tuneup.  The tech used LogMeIn to conduct the remote session that was expected to take about 2 hours, but I knew the system was really stressed and I expected it to go a bit longer.

I sat in front of the computer and watched the process. I watched as he began cleaning up, checking start-up files, installed file and encountering problems. It was interesting to see how he reacted to some of the problems for which I had invented workarounds.  In each case, he came up with his own temporary solution, some more elegant than mine, but others not as slick.

I was impressed with the arsenal of specialized programs he installed and uninstalled to get deep into the bowels of the system. One by one, the problems began to peel away and at about the 2 hour mark, he typed that he was going to restart the system to see if all was well.  It wasn't.

As he tested some programs, he got a message that the system could not load the resource DLL.  At first we thought it was one program, but as he worked the problem spread to many. As it turned out, resolving this problem took the was a sticky one.  Two more system restrore points and and hour and a half passed before he got a clean reboot and test.

He asked if I was satisfied with the work.  I told him that I was satisfied the he was competent and that he had worked hard, but I couldn't comment on the quality of the work until I had runs programs and tested things myself.  I said I would be happy to provide feedback then. He thanked me, I thanked him, and we ended the session.

I have completed the testing, and in case you hadn't noticed, I'm in the process of providing feedback.  Here's what happened when I test the system.

The first thing I noticed is that the system, which had previously taken about five minutes to boot, now took just slightly over three minutes, a significant improvement.

During the boot, the new hardware wizard popped up.  If I had been an uneducated user, that would have been a problem, but I figured I could handle that one on my own.  For now, I just canceled out and continued.  The boot completed successfully and now came the big test, the running of Adobe Production Suite.  Sweet! Everything ran fine.

Next, I tried some uploads and downloads.  One of the small problems that existed previously was the download process.  After downloading, the download window should remain open and allow you to double-click the download to launch it.  The problem was that the window cleared immediately after downloading.

The problem was still there, but to be honest, it was the easiest work around and I didn't really expect the tuneup to fix it.  Had it done that, I would have been surprised.

Next I tried to upload a file to one of my websites, but when I tried to start WS_FTP Pro, I got the DLL message.  Again, had I been an uneducated user, it would have been reason to call back to SmartSupport.com.  However, I just uninstalled the program and reinstalled it.  That solved the problem.

After more testing, I tried a shut down to see if the problem of having to do it twice had been solved. It had been, but there was a message that important updates would be installed on shutdown.  This didn't site right to with me, so I started the system again.

On start-up, I got the new hardware wizard and on shutdown, I got the important update installation message again.  For me, both fixes were simple.  I just went to the device manager and uninstalled the non-existent hardware, and went to Windows update and downloaded an optional program.  Both problems were solved.

So, how satisfied am I?  We on a scale of 1 to 10, I would say I'm about an 8, going on 9.  I would take off one point for leaving the shut down message, the one DLL issue, and the hardware wizard. (No points off for the download window problem.) And I will reserve one point until I work with the system for a few more days.

The $100 was well spent.  I had already put in more hours than they did without having any luck.  Truth be told, if I had called them sooner, their job might have been easier.

But what if I had been an uneducated user? Well, that's where companies sometimes get a bad rap.  It's hard to say what might have happened.  The chances are that if they encountered all three problems right away and called back, SmartSupport.com would have fixed it easily.  However, if they had to call back three times, it might have pissed them off.

The bottom line is that an uneducated user would not have gotten their computer into the mess I got mine.  To do that took a real pro and to fix it took a real pro.
Posted by Art at 11:03 AM No comments:

I worked for the last two days to transform my 1962 yearbook from the print version to an online version, However when I posted the link, Facebook did this! 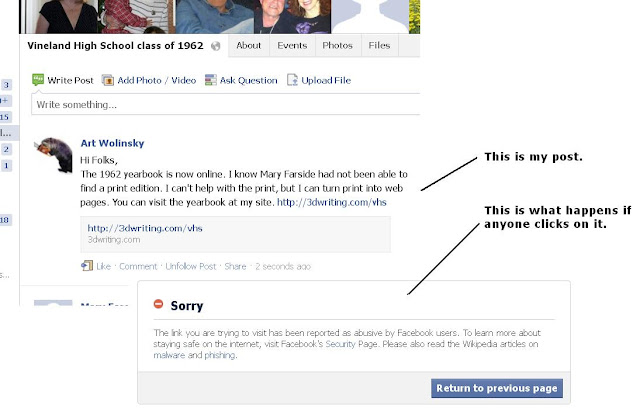 There is nothing abusive on the site and I suspect I have been the victim of Facebook software that didn't like the fact that I have a blog about the animals on our pond.  Facebook might think the Sherwood Beavers are something other than what they are.

At any rate, I'm looking into it further with contacts I have with Facebook.  The good news is that the problem is strictly a Facebook problem.  For for my VHS friends, you can get to the yearbook by clicking on this link.

I'll be posting more about the abuse notice when I learn more.
Posted by Art at 11:55 PM No comments: